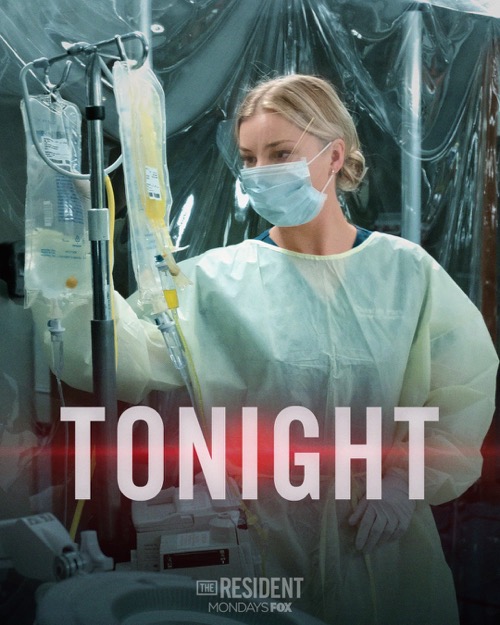 Tonight on FOX their new medical drama The Resident airs with an all-new Monday, January 28, 2019, episode and we have your The Resident recap below.  On tonight’s The Resident season 2 episode 11, “Fear Finds a Way”  as per the FOX synopsis, “A nasty flu season turns out to be masking a terribly infectious disease, forcing Chastain to quarantine and diagnose infected patients. While Conrad, Nic, and Alec work tirelessly on Meg, who was Nic’s favorite guard from her stint in prison, Devon and the others treat Sam, a love-sick patient with flu-like symptoms.

Mina finds herself testing Quovadis medical devices in an effort to defend Dr. AJ Austin, who feels responsible for the death of a patient and is staying away from the OR.”

The Resident season 2 episode 12 airs at 8 PM – 9 PM ET on FOX. Make sure to bookmark this spot and come back for our The Resident recap! While you wait for the recap make sure to check out all our television recaps, news, spoilers & more!

Conrad and Nic go to see a house. They both love it. Nic is worried about being able to afford it. Meanwhile, the ED is full of patients with the flu. Devon and Irving assess the room. People are sneezing, germs are being spread everywhere. Devon manages to get them all over his hands. He uses antibacterial but Irving doesn’t.

AJ hands out all of his surgeries. He is headed to do a guest lecture. Bell tells his assistant to look into Gordon’s background. Bell gets the news that 2 more elective surgeries have been canceled because of the flu. In the ED, a fight breaks out. One person looks like they may pass out. Devon helps them sit and assesses them, seeing a rash and red eyes. It’s the security guard Meg that knows Nic from prison. Conrad and Nic look her over. They need to run some tests.

Bell visits Dr. Shaw. He knows he has experience with the infectious disease. He will help at Chastain for some ultrasound machines. They barter and agree.

Devon assesses a patient who won’t stop talking about the love of his life Sue. Shaw shows up and sends those with the flu shot home with a care bag. The others can stay and get treatment.

Conrad asks Nic what she is thinking about the house. She is reluctant. Shaw arrives to look over Meg’s labs. She looks to have a special flue strain. They need to keep her isolated. They tell Bell who is angry. Conrad will run more labs while Shaw and Nic head back to the jail to get to the source of what made Meg sick, patient zero.

They arrive at the prison and starts assessing inmates. They track down an inmate who has a rash in her hands. She tells them she and Meg feed the pigeons in the yard. They got sick from the droppings.

Irving calls Devon to see his patient who wouldn’t stop talking about his girlfriend. He has become worse and has a rash. They move him to isolation.

Bell wants to transfer Meg and the other patient to another hospital. Conrad, Nic, and Shaw are against this. He tells them they have a few hours before the transfer to diagnose and treat.

Mina runs some test of her own with a lab tech, testing the valves. She sees that they are not reliable especially for a patient with a young heart.

Conrad and Nic’s patients Sam and Meg are now in the same room. Sam starts to cough blood. Conrad tries to help him. Meg starts seizing. Nic runs in without a suit exposing herself.

Conrad brings Meg for a CT. They don’t see anything. They start collecting samples. Meanwhile, Mina finds AJ at his lecture and tells him what she has learned. He doesn’t want to listen. His mentor told him it was his ego.

Conrad and Shaw discover it is the black plague. Sam had it first and it looks like his girl Sue is patient zero. They get her into the ED.

Later, Devon tells Sam and Meg that they ate going to be all right as well as Sue.

Nic drops by the clinic to say thanks to Shaw. AJ brings Mina to see his mentor who is having a lavish dinner with his wife at a restaurant. AJ confronts him. Gordon pretty much owns his mentor and AJ tells him he knows about his relationship with Gordon and his company.

Bell gets told by his assistant that Gordon did trials with a doctor in Jacksonville. That doctor has since killed himself.

Nic arrives home. She and Conrad talk. He thinks he was a project for her to fix and now that there isn’t anything to fix she isn’t interested. She leaves.