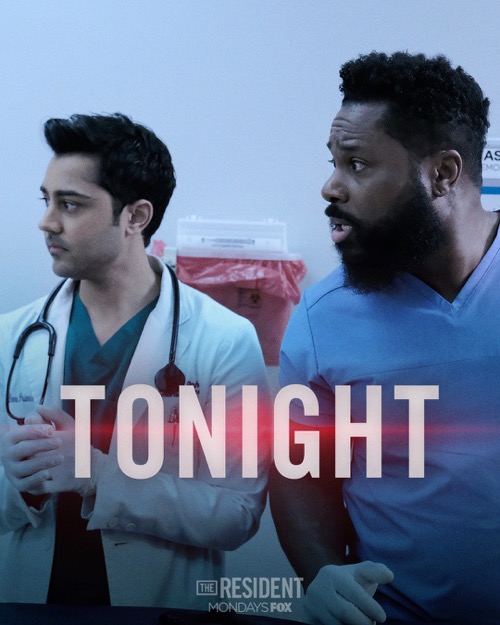 Tonight on FOX their new medical drama The Resident airs with an all-new Monday, March 18, 2019, episode and we have your The Resident recap below.  On tonight’s The Resident season 2 episode 17, “Betrayal”  as per the FOX synopsis, “The surgeons work together to save the life of the Raptor’s old mentor, Abe, who is their only inside source to Quovadis.

Unfortunately, when Nic and Conrad take on a patient needing the hospital’s only viable ECMO machine, they must decide between saving the life of Abe or saving the life of their younger, more stable patient. Meanwhile, Marshall puts himself in serious danger to help take down Gordon Page once and for all.”

The Resident season 2 episode 17 airs at 8 PM – 9 PM ET on FOX. Make sure to bookmark this spot and come back for our The Resident recap! While you wait for the recap make sure to check out all our television recaps, news, spoilers & more!

Dr. Abe Benedict was shot at his home. AJ had found him when he went to go talk to him about Quovadis, but unfortunately, Aj’s mentor never got around to talking because he was found unconscious. He needed to be rushed to the hospital right away for surgery and so AJ never questioned what he came across on the scene. The doctor just focused on his friend and making sure he didn’t die. AJ went with Abe to the hospital and he informed the many doctors assigned to his case. They all wanted to treat Abe for attempted suicide and no one began questioning it until Devon started to ask around. He said that the Quaovadis could have wanted to keep Abe quiet by shooting him and you can tell when the situation is so bad that no one really vocalized a disagreement.

They all wanted to know what happened with Abe. He was shot in the abdomen which seemed odd for a surgeon because he would know how to kill himself with much less pain. Also, the way the bullet traveled throughout Abe’s body was at an odd trajectory and at first glance, it did appear as if he was shot. This has been enough for Devon even if it wasn’t for anyone else. The other doctors were more concerned about keeping Abe alive than they were with what he might say and so they took Abe’s surgeries slow. They didn’t want to rush him and risk losing their patient. Devon would normally have understood and so his behavior with Abe was another thing that stood out with this case.

Devon didn’t care that he could possibly risk Abe’s recovery with some of the things he was saying. He wanted to bring the patient out of sedation and he wanted to free the patient from his tube just so Abe could finally be free to speak about Quovadis, but both of which could have killed Abe. He needed assistance to live and his health shouldn’t be dependent on what testimony he could give. The doctors and the nurses involved with the case would take down Quovadis another way. Conrad was working on it with his father. Marshall Winthrop had approached Gordon Page as a potential investor who wanted to swallow up Quovadis and Page had seen right through him. He knew that Marshall simply wanted to know where the bodies were buried and he didn’t want to confess that if he could still save his company.

Gordon Page has killed people in order to cover up what was happening at Quovadis. He told everyone that his medical instruments were visionary and that all of his products were made in America because he wanted people to think that its all been run past the USA’s strict guidelines. Except he was lying through his teeth. His products were made in Asia where they could be cheaply and not even with the best steal. It was made to look like nice and was prone to breaking down or killing a patient nine times out of ten. It was all about looks with Page and not functionality. His products don’t work and the longer he pretended they did the more money he gets. He was one just lawsuit away from everything collapsing and so he wasn’t going to accept Marshall’s help when he finds an investor to dupe.

Page was going to find a rich investor who hasn’t been caught up on the bad press and he convinced that guy to rebrand. To let Quovadis live on with a new publicist and possibly a new name. Page was going to walk away from all the scandal cleanly if they didn’t catch him in time and so Marshall did everything he could. He found out who were the investors interested in Page and he talked to them. He told them about how Page was killing people and that it wasn’t about money or business now because a man like Page needed to be stopped. Marshall was able to convince the one serious investor to back off, but he knew that Page wouldn’t stop until he found the money somewhere and so that’s when Marshall went to the FBI. The feds wanted to take Quovadis down and they needed help. They agreed to put a wire on Marshall and he was going to go back to Page’s office.

Page was desperate now that he lost his latest investor and Marshall was going to use that to his advantage. He was going to pretend that he already talked to Abe and found out everything. He was hoping to bluff his way into a meeting with Page and that way he could get a confession on tape, but it was going to be dangerous. Marshall had told his son everything and Conrad pleaded with him to be careful. They didn’t know what Abe actually had to say and he didn’t want his father to make assumptions that could cost him leverage with Page. Only Marshall said he’s been doing this for a while and that he had it. He had the feds at his back and had been briefed on everything the hospital had learned through their doctors. And so he told Conrad that he didn’t need to worry about him.

Conrad couldn’t help it if he was scared of his dad. He knew the risk his father was taking every time he looked at Abe. Abe began experiencing respiratory failure and the doctors had to choose between giving him a life-saving treatment or a man in his twenties. The other guy had been a patient of Nic’s and she wanted to save the twenty-year-old that never got a chance to experience life while the others disagreed because one way or another they wanted to find out what happened to Abe. It was Bell’s call to choose who got the treatment and he thought Abe deserved it. Abe was in a better condition and the younger man could survive a little longer without assistance. And so Abe was treated.

He even woke up later and wrote down the word “sever”. No one knew what it meant, but Conrad later received a call from a Marshall who was with Page and Page wanted a confirmation that Abe was alive.

All Conrad had to do was say the word “sever” and it resulted in a massive freak-out.

Page confessed to attempted murder and was trying to sneak Marshall out of the building when the feds moved in.

The Feds managed to shoot up the place, people were hurt (thankfully not Marshall), and as his last act as the visionary behind Quovadis – Page led the feds on a fatal car chase in Atlanta.