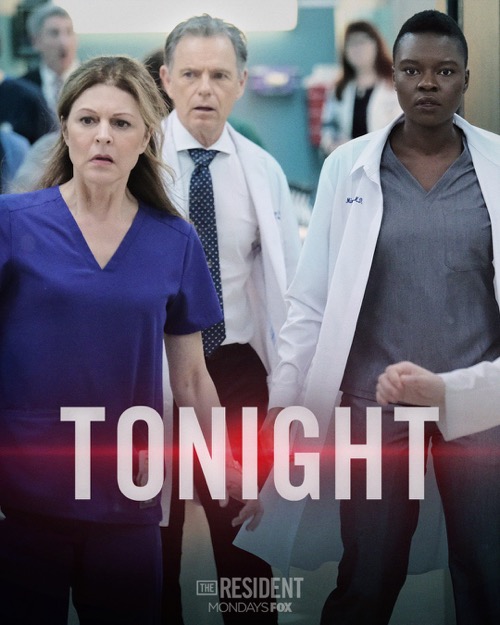 Tonight on FOX their new medical drama The Resident airs with an all-new Monday, April 1, 2019, episode and we have your The Resident recap below.  On tonight’s The Resident season 2 episode 19, “Snowed In”  as per the FOX synopsis, “When Atlanta is struck by a severe snowstorm, Mina must perform a big surgery without the help of The Raptor to save the life of a young father, while Kit and Bell get stuck babysitting the man’s children.

Nic and Conrad experience a disagreement with a patient’s treatment, causing further strain in their relationship. Meanwhile, Devon teaches an important lesson about life and death to a first-year med student.”

The Resident season 2 episode 19 airs at 8 PM – 9 PM ET on FOX. Make sure to bookmark this spot and come back for our The Resident recap! While you wait for the recap make sure to check out all our television recaps, news, spoilers & more!

Jessie was on dialysis. She was suffering from kidney failure and knew that she needed a new kidney, but then she met Alex the new doctor at the clinic and he had made a few suggestions. He implied that there was still a way to save the kidneys that Jessie has now. Alex said there were alternative medicines they could pursue and Conrad had been quick to point out that Alex wasn’t a part of Jessie’s medical team. She was being treated by the doctors at the hospital and it was up to them to decide what was best for her. Jessie didn’t need to have her hopes raise and that was one of the reasons Conrad had been so swift. The other reason was that he knew what Alex was doing. Alex was sucking up to the sister to get to Nic to see him in a different light and there was no way as Nic’s boyfriend was Conrad going to allow that.

Conrad could see that Alex had it bad for Nic and he later brought it up to his girlfriend because he wanted to know what she was going to do about it, but she said she already shut it down. She was clear when she said she loved Conrad and that they were staying together. She also told Alex that she and Conrad had been through it and that she didn’t want to give up on that except she didn’t mention that to Conrad. Conrad was supposed to be a new person and he had to trust that Nic could handle in on her own. She didn’t need him to intervene or get so jealous that he became out of control. Nic wanted to see the new Conrad that respected her enough to let her make her own decisions and so Conrad showed that man. He backed off of the whole Alex thing and he stepped in where he was needed.

Bell asked everyone to step in during the blizzard. There was going to be storm-related complications and one showed up as he was speaking. He and the others watched as a couple of kids drove their father’s car into an ambulance. No one was seriously injured from the accident, but the reason the kids were left driving the car was that their father was unconscious. He collapsed in the snow and his kids had to dig him out. He was frozen by time they got to him and so they were hoping that the doctors could restart his heart however there was a rude medical student named Eric who had been hanging around when the patient was brought in and he was more focused on wanting to practice for his death duties than he was on about the patient or the man’s kids that could hear him.

The kids were distraught to hear their father be spoken of as task needing to be handled, but Okafor stepped in and handle things. She banished Eric the insensitive medical student and she promised the patient’s children that she could help. She tried raising the man’s pressure and later she put him on a machine to help circulate warm blood through his system. It seemed to work because his heart went into a rhythm once he started to warm up and so his children had been right when they said he wasn’t dead. His eldest Eva has a broken wrist and the youngest Eli has strangely taken a shine to Bell. So the kids were otherwise okay and the only one that has a problem with how long it was taking the patient to come around was Bell. Bell couldn’t stand hanging out with kids all the time and so he jumped at the first surgery he could join.

Bell decided to jump on Donna’s surgery. Donna was a cancer patient that was ready to die she had signed a DNR and everything, but the last thing on her bucket list was to see her one true love. He had gotten caught up in the storm and it was taking him forever to get to the hospital. It was as she was waiting that she developed complications and needed surgery. Her DNR means she should have been transferred to a hospice because she didn’t want any more procedures and Conrad had respected that. He said they shouldn’t try to fight what she clearly stated were her wishes and so he was arguing with Nic because she said that Donna while not expressing an exact order had said that she was looking forward to seeing Bob again. He was the one that got away and Donna wanted to see him before she died. And so Nic went to Bell to make the decision on this one because she didn’t like Conrad’s answers.

Conrad didn’t know that Nic went to Bell or that Bell signed off the surgery because she wanted to escape a couple of kids. It just happened while he was treating another patient. He was seeing to Jessie who developed an infection and the two of them talked. Jessie told Conrad that she preferred him as her doctor and so she was going to stick to his method of her treatment. Conrad was appreciative of Jessie who he saw as a little sister and it ruined the moment when he was informed what Nic had done. He raced to the OR where he could see Nic was watching the surgery from the gallery and he let her know that she shouldn’t have gone over his head to get something the patient didn’t want. Donna had wanted to die with dignity and unfortunately the simple surgery that she didn’t want to push her into cardiac arrest.

Bell should have let her go when her heart began to fail, but he was more concerned about his stats and so he kept trying until he got her heart beating again. Donna later woke up and she thanked Nic for what she did for her. Donna would have been okay if she slipped away except she was glad to see Bob again and so maybe Nic hadn’t made a mistake. She even chose the right guy for the job because Bell kept Donna alive and by the time he returned to the kids he was able to pass on the good news that the man was alive and well. The doctors on that case had to do everything imaginable to keep Mr. Garcia alive and so it had been a near miracle that it all worked out.

Also, Donna held on this entire time to speak to Bob because she wanted to tell her ex-boyfriend how much he hurt her and that he could go to hell.

It had come as a shock to Nic but it also woke her up because she realized that she needed to talk to Conrad and finally be truthful with him.