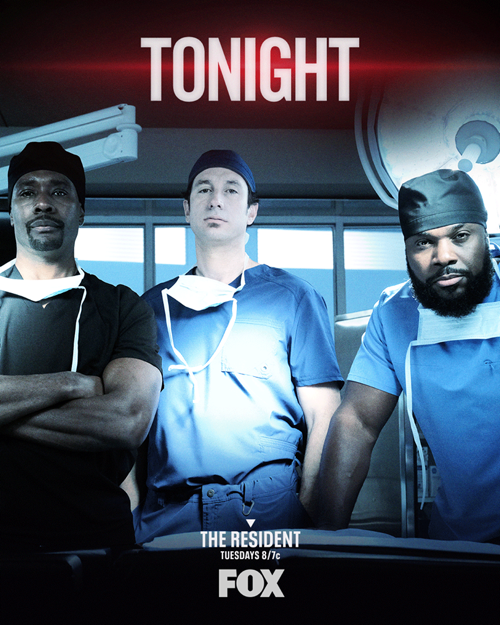 Tonight on FOX their new medical drama The Resident airs with an all-new Tuesday, October 8, 2019, episode and we have your The Resident recap below.  On tonight’s The Resident season 3 episode 3, “Saints & Sinners”  as per the FOX synopsis, “A police officer shows up to the ER with an injured criminal that he caught in the act, and it’s up to the Chastain staff to keep him alive in order to save an innocent life.

Nic gets roped into a surgical rotation with Cain that leaves her questioning the way he operates, and Conrad makes a shocking discovery about the hospital. Meanwhile, Bell pursues a new fiscal venture that may bring him into a whole new market.”

The Resident season 3 episode 3 airs at 8 PM – 9 PM ET on FOX. Make sure to bookmark this spot and come back for our The Resident recap! While you wait for the recap make sure to check out all our television recaps, news, spoilers & more!

Conrad and Nicolette discuss living together and what annoys them about each other, they are interrupted when a cop on a big speed chase brings in a robber he’s caught and is badly injured, he needs the staff to keep him alive since the thief and his crew took a homeowner hostage and only he knows where they are.

Dr. Cain has requested Nicolette to work with him for the day, which she doesn’t understand why. While en route to the operating room to remove the metal rod in his chest, the thief flatlines and Dr. Austin is reminded by the detective that if the thief dies the homeowner does as well putting pressure on the team to keep him alive.

While helping out Dr. Cain Nicolette finds out something else might be wrong with a patient and seeks to help her but Dr. Cain opposes. Conrad has a patient who is there due to migraines he suggests to runs some test which comes back negative, as he’s telling the patient Rick he can go home Rick collapses on the floor causing a code blue and he dies sending Conrad to seek answers on why feeling as if he has failed.

Dr. Bell seeks to become a household name like Dr. Oz. , by trying to invest in the next big medical drug. As Conrad examines the detective for injuries he discovers he’s more hurt then he lets on and decided to keep him in the hospital.

After looking at the detective Raines scan he discovers an aortic dissection and he wants to operate but it’s risky. As Conrad’s results come back from his deceased patient they discovered that in the past month six patients who were dialysis patients have all died from pulmonary embolism attacks.

Dr Cain and Dr Austin argue over which surgery would go first either the aorta or his spine during the surgery a rupture happens and they frantically work together to save his life and they do.

Dr Bell goes to Greysons father to invest money in the medical supplements, and he has one stipulation that Bell stop eepojg with his wife. Nicolette discovered that Dr Cain’s patient had another medical condition that could be treated with medicine instead of spinal surgery, but on her way to tell the news she discovers the patient is gone and Dr Cain has taken her to the operation room and she rushes to stop him.

He is at first upset that Nicolette has cost him the surgery which was $150,000 ,it then offers he a position on his team.