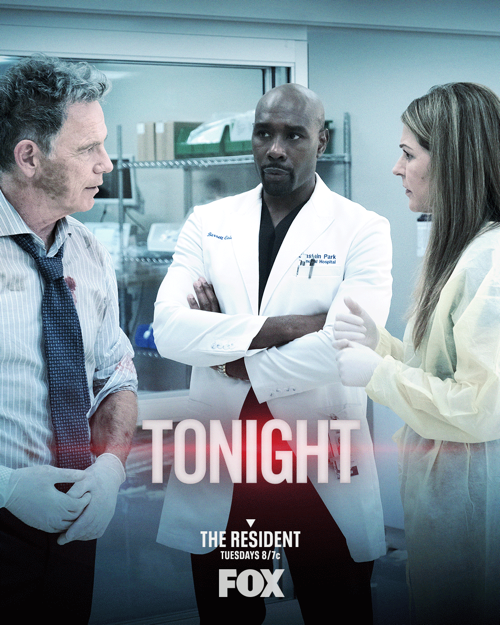 Tonight on FOX their new medical drama The Resident airs with an all-new Tuesday, November 5, 2019, episode and we have your The Resident recap below.  On tonight’s The Resident season 3 episode 5, “Choice Words”  as per the FOX synopsis, “After a plane crashes in Atlanta, Devon is overcome by guilt at the thought that he could have prevented the tragedy. Bell, who was a passenger on the plane, makes it his personal mission to save the life of the man seated next to him.

Meanwhile, Adaku returns to ask Mina a big favor, the Raptor struggles with telling his birth parents about meeting his biological father and Conrad and Nic consider risking it all to investigate a drug that might be linked to Jessie’s death.”

The Resident season 3 episode 5 airs at 8 PM – 9 PM ET on FOX. Make sure to bookmark this spot and come back for our The Resident recap! While you wait for the recap make sure to check out all our television recaps, news, spoilers & more!

Devon doesn’t know what to do with a pilot who has come into the ED. He has a blood-alcohol level and is a heavy drinker according to his liver labs. He has been flying drunk and Devon doesn’t know if he should report him. Instead, he gives him an AA pamphlet. The pilot denies he has a problem. Devon discharges him.

Nic wakes to Conrad. He is looking over Jesse’s file. He finally tells her Jesse died of a PE and it may be due to a certain drug she was on to treat anemia. Meanwhile, Bell is at the airport. The pilot who Devon discharged walks by. Something is wrong with Conrad’s ticket. He is told to move to the side. He finally makes it on the plane. They leave the tarmac but drop to the ground minutes later after a rough ride. Many of the occupants are injured.

Mina talks to AJ on the phone. She tells him about the plane accident but tells him to go do what he needs to do. Kit =, Nic and the others run around taking in new patients with injuries. Conrad assesses a woman who was in the plane crash. She shares she has narcolepsy. He cleans up a wound on her forearm. Her BP is high. He wants to run some tests. All she wants to do is get back to work.

Nic looks over several patients who were headed to a spelling bee. Devon comes in. He puts two and two together and is devastated. He tells Conrad he thought the pilot was going to get some help.

Conrad and Nic head to talk to one of the doctors running the renal trials Nic was involved in. Meanwhile, AJ goes to visit his parents. He tells them that he found his birth parents. They want to know all about it. He tells them, after making sure they know he is who he is today because of them.

Bell goes to see Carter and Kit who are assessing the man who was sitting next to him on the plane. Bell collapses.

Conrad contemplates looking at the records of the patients who were part of the trials. Nic talks him out of it.

Kit and Carter tell Bell he has a herniated disc. Carter thinks he needs surgery while Kit wants him to take therapeutic measures.

Mina visits with her pregnant best friend. She asks Mina to be the godmother. Conrad talks with his patient about her BP. She doesn’t care what it could do to her. She gets up to leave. Devon tries to stop her. Conrad tells him they can’t make her stay. Devon is feeling guilty over the pilot and trying to avoid an incident like the one that happened. Devon and Conrad watch her leave and realize she has a staggering gait. Her narcolepsy has been misdiagnosed.

Mina tells her friend she is the wrong person to be her godmother. Her friend gets upset. That is all that really matters to her.

In the OR, Carter gets a little too cocky when his patient starts to have trouble. Kit steps in. They all work to stabilize the patient. Bell meets with the patient’s wife, the one who he sat next to on the flight. He tells her that her husband’s BP dropped for a long time in the OR. He is alive but not sure if he will wake back up.

AJ sits with his mother at the hospital. She tells him she was scared to adopt. But she did it. She was worried about not being enough. Now she thinks he is scared to meet his biological mother. She tells him to do it. She will always be there for him. He cries and agrees to do it.

Mina and AJ catch up. He tells her about his decision to meet his biological mother. Something he says resonates with her and her situation with her best friend.

Devon and Conrad talk about the pilot again. Devon was right not to report him. He took an oath to protect his patient’s privacy. Conrad strongly disagrees.

Bell spends some time with his patient who is awake. Conrad checks on his patient with narcolepsy. She has come out of surgery and improved. Bell is in PT for his back. Carter and Kit exchange words in the elevator. He is mad Bell chose PT and not surgery. He reminds her who bills more in surgeries a year. Mina finds her friend and tells her she would like to be the godmother.

Devon is headed home when the pilot he discharged the other day comes in. He saw the crash. It wasn’t him flying but it could have been. He needs help with his drinking.

Nic and Conrad talk about how they need to keep searching for answers for Jesse. After Nic leaves, Conrad heads back to the computers and contemplates looking at the files.