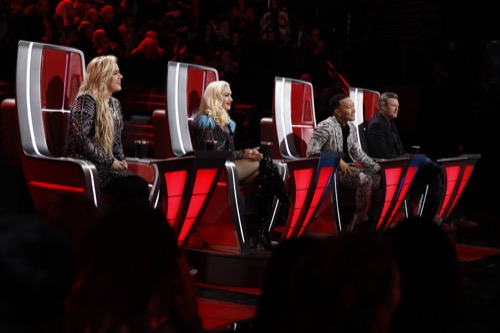 Tonight on NBC’s Emmy Award-winning musical competition The Voice airs with an all-new Tuesday, December 17, 2019, season 17 episode 26 “Live Finale, Part 2”,” and we have your The Voice recap right below. On tonight’s The Voice season 17 episode 26 “Live Finale, Part 2” as per the NBC synopsis, “It’s the live season finale of “The Voice,” and host Carson Daly will reveal who America has chosen to be the winner.

Alex, Will, Max, and Shane from this season sing, “Bring Me Some Lovin.”

Next, our multi-platinum seven-time Grammy-winning superstar, Lady Antebellum performs, “What If I Never Get Over You,” off their No.1 album, Ocean.

We get to see some behind the scenes of Kelly Clarkson, and she mothers the contestants.

This is an unlikely pairing, but they have turned into great friends this season; Rose Short & Gwen Stefani. Now Rose joins forces with a fellow powerhouse, she is a Tony and five-time Grammy award-winning gospel singer, Yolanda Adams.

We will find out our winner so enough, but first, some of your favorite female performers from this season; Kat, Marybeth, Khalea and Gracee singing, “Neon Moon.”

We get a behind the scenes look at Ricky Duran and Blake Shelton, then Ricky joins Grammy-winning blues-rock icon, one of the best guitarists in the world, Gary Clark Jr. to perform on stage.

Jake joins one of his favorite bands with their new single, “Over Drinking,” Little Big Town.

More of the powerful female artists from this season perform; Hello Sunday, Myracle, and Joana, singing, “Keep Me Hanging On,”

New Male Vocalist of the Year with his seventh consecutive number one hit, Luke Combs sings, “Even Though I’m Leaving.”

We are minutes away from finding out who won The Voice.

First, we will find out who the artist is in fourth place – Rose Short.

The finalist in third place is – Katie Kadan.

The winner of The Voice season 17 is JAKE HOOT