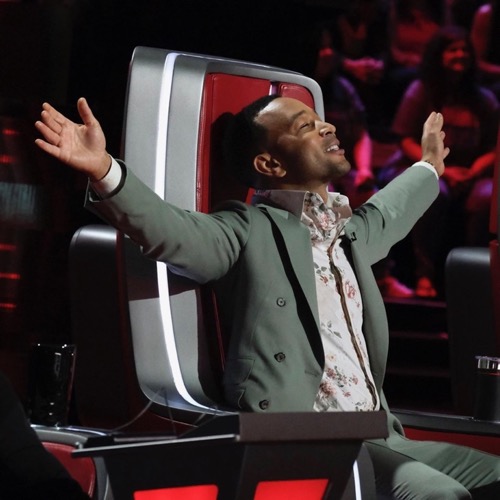 Tonight on NBC’s Emmy Award-winning musical competition The Voice airs with an all-new Tuesday, May 7, 2019, season 16 episode 18 and we have your The Voice recap right below. On tonight’s The Voice season 16 episode 18, called, “Live Top 13 Eliminations,” as per the NBC synopsis, “Seven artists are revealed as safe via America’s votes; the bottom three artists compete for the instant save and two are eliminated.”

The top 13 join on the stage. Congratulations to Maelyn Jarmon, she was the most streamed voice artist on Apple music last night.

The first two artists that are safe and moving on to the semi-finals are from Team Legend, Maelyn Jarmon and from Team Blake, Dexter Roberts.

John Legend and his team sing, “Say a Little Prayer For You,” a Dionne Warwick classic hit.

Blake Shelton joins his team on stage for a rendition of, “I Got My Mind Set On You,” by George Harrison.

The remaining six artists head back to the stage for more results.

The following three artists are going to perform for the instant save because they have the lowest number of votes. They are LB Crew from Team Adam, Mari from Team Adam and Kim Cherry from Team Blake.

Oliv Blu from Team Blake, Jej Vinson from Team Kelly and Celia Babini from Team Legend, are all leaving the competition.

Kim Cherry from Team Blake is signing, “My Loving, You’re Never Gonna Get It.”

Blake: “You did what you always do, you get up on stage, you won the moment and embrace who you are. I pray that America votes for you tonight, you need to be on this show.”

Adam: “That should be enough for you to move on. It is really upsetting that you are here right now. Make sure that this girl goes through, I don’t understand, I am shocked.”

Adam: “I feel exactly the same about LB, I am shocked that you had to come back at all. I want to see you move forward as much as Marly. You are both so deserving to be here.”

One artist was instantly saved by America and that was, from Team Blake, Kim Cherry. This is the end of the road for LB Crew and Mari.