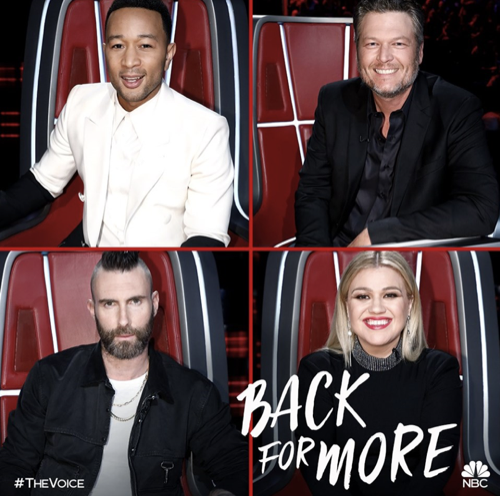 Tonight on NBC’s Emmy Award-winning musical competition The Voice airs with an all-new Tuesday, May 13, 2019, season 16 episode 20 and we have your The Voice recap right below. On tonight’s The Voice season 16 episode 20, called, “Top 8 Semi-Final Performances,” as per the NBC synopsis, “Seven artists are revealed as safe via America’s votes; the bottom three artists compete for the instant save and two are eliminated.”

Tonight was the Semi-finals! Time really did fly with this season and now we’re down to eight. There were eight contestants left and to keep this position in this competition they needed votes. Every vote counts! The contestants gave two performances with this latest episode and they even upped a notch this time around because the contestants finally got a chance to cover The Beatles. The Beatles remains one of the most iconic bands there is and so the contestants got a chance to stretch themselves. They were either going to prove how talented they are with how well they could tackle the song or they were going to fall flat and give America the excuse they need to save themselves from a waste of time.

Then there was also going to be the second performance. The contestants were going to be showing off their solo skills with their original take on a song and the first one that did so was luckily Andrew Sevener. He was a special case. There was only one person that turn around for him and he’s since he proved to Blake what a wonderful decision that was. Andrew’s really come into his own with not just his confidence but so much more. He also rocked out onstage with this performance. It was his best yet and all the judges were in agreement on this. They love Andrew and they thought he would make it to the finals! And it was a plus for Blake because he has the most contestants still around and so he was definitely riding this high.

The next performance, however, was a duet. Kim and Shawn got together and they gave an original take on “Eleanor Rigby”. They made it soulful and both were simply amazing to watch. It wasn’t as great as Sevener’s performance because that had been like a concert and this duet was more like what MTV used to pull out before all those reality shows, except it was still good and that was more than it could be said of Gyth Rigdon. He had been another favorite of the judges and he gave one of his weakest performances when he chose to sing “God Bless the USA”. It was a good song and it meant a lot in these uncertain times. It just wasn’t sung as great as it could have been and so the judges were left unimpressed.

Again, it was more the artist and not necessarily. It was the first time that “God Bless the USA” was ever sung on the show and the judges acknowledged this. They also went on to say that the vocals were a letdown and so who knows what Gyth’s fan service might have cost him. The next performance was much better. Blake came back with Kim Cherry and she was a crowd favorite. She was Insta-Save last time and that’s because America saw how talented she is. She could rap, play the saxophone, and she proved tonight that she could also play the piano. And, oh, never forget that she could sing because everyone seems to have doubted if she could in the beginning and now she suddenly she has a voice for Broadway – ok, it’s not an apology, but okay!

Now this second duet was something that the contestants themselves had been looking forward to.

Maelyn and Rod were big fans of each other and this was despite them battling it out in the past. So coming together for a duet was a great opportunity for them. They sang “Yesterday” and their rendition was just so haunting. It was beautiful in its own way and at the same time, they had the material with the care it needed. Also, the judges were blown away with this one and all four gave a standing ovation because this song instantly became their favorite performance of the night. And it remained in the judges’ mind when they next heart Carter Lloyd Horne and his rendition of “Take Me to Church”.

Carter chose this song because his fans picked it for him. He’s seen over two hundred tweets telling him to do this song because everyone believes his voice was made for this song and unfortunately his final performance didn’t live up to the hype. He started off pitchy and was in and out of this song. The judges were understanding because they figured it might have been a technical problem where he was hearing one thing and they were hearing something else, but the overall performance wasn’t that great. It was on his worst to date and the judges actually seemed to be trying to cheer him up. They reminded him that other artists have had bad days and that they have come back from it. And so can Carter!

The next performance had been Rod Stokes and luckily he didn’t have any technical difficulties. He sang a beautiful song in honor of his grandparents and it was such a moving performance. Rod has one of the best voices this season and he really did move the audience. His coach was especially proud because she said that she and Rod were of like minds. They were basically twins with their same thought patterns and so he was another strong choice in the final four. Which could also be said of his duet partner. Maelyn Jarmon was another great artist because she could listen to a song in its original format and then slowly turn it into her song. Her renditions were always the best and her take on Rihanna song just showed much she deserved to be the final four as well.

The next duet was more fun than competition. Dexter teamed up with Gyth to sing the classic song “Hey Jude” and the guys weren’t always cohesive when they were singing. It was more like “you have fun, no you have fun” sort of situation because they clearly both enjoy this song. It was good if not great vocal wise and so sometimes the vocalists did get carried away with their Beatles rendition. The following duet wasn’t any better. Andrew and Carter were paired together and they sang “Help” in two different styles. Andrew gave it a country take with that raspy voice of his and Carter sang this song almost too happily. It was a song called “Help” about reaching out at your lowest point and so maybe they should have done their own spin on this song… just to go with the changing times, at least, because singing it like a camp song suddenly seems odd in this new mental illness awareness era.

Dexter Roberts went next. He was another country artist and he brought that country take to a nontraditional song like the 3 Doors Down’s song “Here Without You”. It was in honor of his nephews and nieces because he’s played such a big part in their lives and he’s missing them right now because of this competition. It had been a smart move on his part because he showed that he could step out of his genre for inspiration and that his voice could fit anything. He was great with this performance and his coach had been proud of him. Blake was proud of him and let’s be honest. Blake best shot at the finals was really Dexter and Kim because the others had fallen flat tonight and you’re not cut out for the competition once you’ve shown a weakness.

The last performance of the night went to Shawn Sounds. He was the last R&B Soul artist in the competition and he came to represent with his song “A Song For You”. It was dedicated to a local elementary school that was having a rough time of it and that usually means cut down budget, second-rate books (if they’re lucky), and teachers that have to come out of a pocket to provide their students a proper education. Shawn wanted to inspire the people that have a deal with a broken system and he did that with this song. It was such a soul-uplifting song that it put on par with Maelyn and the judges truly loved it.

So before you go, don’t forget to vote because tomorrow is eliminations!