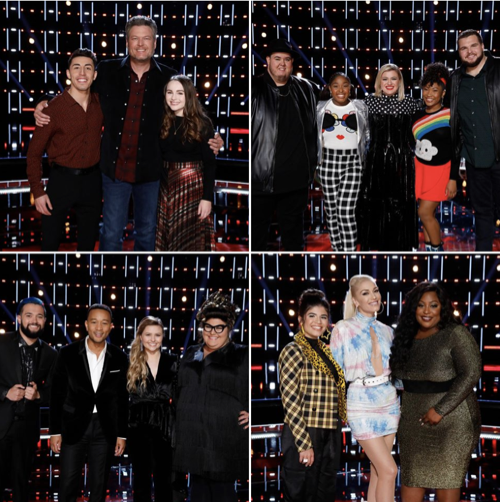 The Final Ten Performed! – Kicking things off tonight was Team Gwen’s Rose Short. As a special treat, she brought her parents with her to practice because she wanted them to see how far she’s come in the competition. She also wanted to introduce them to Gwen. Gwen has been a phenomenal coach. She’s been there for Rose when Rose needed her the most and so Rose wanted to bring these two sides together because she was going to need them both for her performance. Rose had chosen a difficult song. She chose the song Blake Shelton’s song “God’s Country” and she performed it in honor of her father.

Rose’s father is a veteran. He served his country and his own heroics had personally inspired his daughter. Rose was so happy about this song that she gave it her all. She gave a stellar performance and the judges all liked it. The judges also liked the next contestant. Marybeth Byrd has been a star from the beginning and tonight she mixed it up with perhaps her most modern song. Marybeth was given Selena Gomez’s “Lose You To Love Me” by her coach. John had wanted to bring out something dark and sensual in her voice and to that end, this song was a great fit.

Marybeth had a connection with this song. She knew what heartbreak felt like and she poured it all back to the song. Marybeth gave a rare performance because it felt like a genuine concert. Even the way everything was arranged onstage had made it feel like a concert. Marybeth had been a hard act to follow, but Kat Hammock went next. Kat has such a unique voice. There’s no one that sounds like her and so America has constantly voted to keep Kat because her of that voice even if she made mistakes.

Kat has made plenty of mistakes in the past. Her performances weren’t always up there and that’s because sometimes she sounds pitchy. There’s also the issue with the band. The band tonight had seemed like they were on a different speed compared to her and so her later performance still felt lacking. Kate was still a talented young woman. She just needed some help in rearranging her songs and she might get that from tonight. The judges, on the other hand, had loved her performance. They all gave her a standing ovation because they loved her voice and truly it’s the voice that saves her.

Next up was Shane Q. He was almost eliminated last week and that lit a fire under him. He fought for his place and he has to fight for it now. Shane chose a song that was close to his family. His dad loved Billy Ocean and so Shane chose the song “Caribbean Queen”. The song made him excited to sing it and he wasn’t alone in shining onstage. Shane and his coach both allowed for the band to have their own moments and so there had been a guitar solo in there that was killer. And it also added to the performance.

Shane was great. It was now up to his fans to start voting for him and before long it was onto the next one. Jake Hoot went next. He was the top streaming artist on the show and so that was fans already buying his music. Jake didn’t even have to win the show by this point. He was a country musician that could go on to have a long career in his field and so everyone was excited for him. They all watched as he performed “That Aint My Truck” by Rhett Akins and they all loved it. It was a tribute to his late cousin Colton who died in Afghanistan. And it was another great example of why Jake should win this season of “the Voice”.

Joana Martinez went next. The teenager was the youngest of a large family and thankfully all supported her as she pursued her music. Lately, Joana has taken to performing songs from her fellow Latinas and this week was no different. She chose the song “Impossible” by Christina Aguilera. It was written by Alicia Keys and it was quite difficult. Joana struggled with feeling this song and her coach had to assist her. Gwen advised her to put some ‘tude on it. And just by doing that, Joana was able to make this song her own and that’s what the judges will remember.

It was again up to the fans to vote in. It didn’t matter if it was Joana or someone else. They have to vote in and they have to do it quick. Up next was Katie Kadin. She was such a powerhouse and she picked a song that was worthy of her voice. She chose Adele’s “Rolling In the Deep”. It was a diva song and Katie deserved it because after so many years doubting herself – she finally realized how great she was. She has one of the best voices this season and she could take on any one of them in the battles.

Katie’s voice could literally drown out everyone else. She’ll probably stay until the Finals, but just in case vote, please vote. Take Hello Sunday for example. They were in the bottom last week and they were just barely saved. They had needed their fans last time and they were asking them to stay with as they gave another wonderful performance. They sang “Stone Cold” by Demi Lovato. It was a pretty dark song, but they have been through things together and they wanted to celebrate how they were able to push through.

Hello Sunday also weren’t the only performers using their music as a form of healing. Ricky Duran was doing just the same and his music was helping him deal with the loss of both his parents. His father committed suicide and his mother later died from an illness. Ricky had wondered for time why he has such bad luck and so the song “Born Under A Bad Sign” by Albert King was perfect for him. He got to express his anguish and he also reveled in his love for the blues. Ricky was amazing to watch.

He was such a compelling performer that he always captured the audience’s attention. The audience had loved Ricky tonight and so did the judges. No one was prouder of him than Blake. Blake was like a proud papa. He knew his team has a hit with Ricky and now he just has to hold onto him. But John also had a rarity in his bunch. He has Will Breman. Will went last tonight and there was no one that has his voice or his energy. He was like a ball of fire. He was constant and so John gave him a challenge.

John gave him “My Body” by Young the Giant. The song was perfect for Will because it soaked up all of his energy and gave his performance a concert feel. He made that stage into his own. He was all over the place in his dancing and he was electric.

Will was a wild man and that performance all but guarantees a place in next week’s semi-finals.