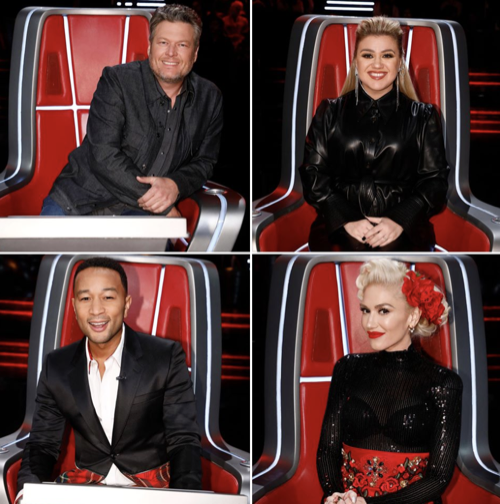 Tonight on NBC’s Emmy Award-winning musical competition The Voice airs with an all-new Monday, December 9, 2019, season 17 episode 23 “Live Semi-Final Top 8 Performances,” and we have your The Voice recap right below. On tonight’s The Voice season 17 episode 23, “The Voice” Top 8 artists perform in front of coaches Kelly Clarkson, John Legend, Blake Shelton and Gwen Stefani. This week’s theme is “80’s Week.” The artists will perform duets of songs from the ’80s.”

The contestants were going to be performing twice tonight. Their first performance would be eligible for votes and their second performance, however, was a duet with their fellow contestants. The theme for the duets was the Iconic 80s. This means epics ballads and even grander music than before. The contestants were all excited about the duets. Only the audience was only going to base their votes off one performance and that’s the solo. Katie Kadan from Team John went first. Her coach chose the song “Lady Marmalade” for her solo and it had been a great fit for her. Katie tends to turn whatever music she’s given into a concert and so treated the audience to another one of those performances again tonight.

Up next was Kat Hammock. She was a member of Team Blake’s and for her solo, she performed “Somewhere Only We Know”. She has a great voice. There no denying that and so it’s just unfortunate that her song sounded like every other song from her. Like there’s no surprises left in store from Kat. She has this rare voice and more than often than not her voice would sound much better if it went unaccompanied. Acapella would be right up her alley. Her voice truly can stand on its own and so right then there was a moment of dread for her later duet. Later, the first of the duets was Will Breman and Ricky Duran. They performed “Your Love” and it was great for them because they both got to rock out to it.

With a duet, though, there’s always one person that sounds better than the other. Between Ricky and Will, it was Ricky that came out ahead. His voice just captured the song more perfectly than Will’s. The next performance was back to the solos. Marybeth Byrd from Team John had realized something. She realized she needed to go back to her country roots after she was almost eliminated and so John gave her the song “Before He Cheats”. It was the first time Marybeth got to show off her sassy side. She also just had fun with this one and it showed. She was relaxed with the song and she took risks that didn’t always pay off. And so her first performance was a toss-up.

Hello Sunday went next. These two girls have only known each other for two years and yet they were the perfect duet. They understood each in a way that was almost twin-like. They performed the very difficult song “Don’t You Worry Bout A Thing” tonight. They had some problems with the fluidity of it when they were in practice and thankfully they were able to get the song where it needed to be by the time they performed it. The girls even received a standing ovation from the judges. The judges were so proud of them and how far they’ve come that they couldn’t help congratulating the girls.

The next duet was Jake Hoot and Marybeth. They performed the song “Up Where We Belong” and they gave it a very country feel. It was sorta hard not to because Jake’s voice is just pure country. There really is no other genre he can do with a voice like his and so it was Marybeth that gave its pop elements. One with think with all of this that the song would sound great, but it really wasn’t. The song fell flat. It would actually have sounded better if it wasn’t performed as a duet and so it’s a good thing no one was voting on the duet else these two country stars would have lost. And up next was Ricky with his solo.

Ricky performed “Let It Be”. He remembered this song from his childhood because his dad and his relatives used to sing it at big family events. Ricky’s family even played this song for his mom after she became ill. It had put a smile on her face and Ricky had gotten teary-eyed just talking about it. His memories of this song is why he chose it. He wanted to feel close to his family during this competition and, because it was so close to his heart, he gave this song his all. It had been a great performance from him. He connected with the audience and he made them feel the moment. Which is quite rare.

Up next was Will. Will performed “Locked Out of Heaven”. It was a great fit for him because he has that cool vibe that can pull it off and so he did great with the song. The judges had loved it because they love Will. Even the audience had loved it because they loved Will. Although, overall, it was as strong as his previous performances. Will has done better in the past and so tonight just needs to be written off as a bad night. Everyone is allowed one of those even if Katie was great with both of her performances. Her duet with Rose Short was next. The ladies did their take on “Express Yourself and it was great for them because they were both powerhouses.

They also proved how easily they can do a Madonna song. They gave perhaps one of the best duet performances tonight and they did so because they made interesting. They gave their own freaking concert with dancers and lights and were both living it up onstage. In fact, the all-female teams did exceptionally better tonight than before. Kat came out of her normal baritone when she performed a duet with Hello Sunday. They performed the song “We Belong”. It got Hello Sunday to go in soft and it finally brought out some fire in Kat. And so this duet had been great for all three young women.

Rose went next with her solo. She performed “I Want To Know What Love Is” which had been a strategic move on her coach’s part. Gwen wanted to remind the audience that Rose could do it all and that’s what this song did. Rose had one of the best nights in the competition. Her duet was her amazing and the only thing better than that had been her solo performance. And up last was Jake Hoot. He performed the song “Desperado” because in honor of his mother. The song is one of his mother’s favorites and he wanted to celebrate the amazing woman that’s always been there for him.

And frankly Jake performed the song as if it had been written for him.