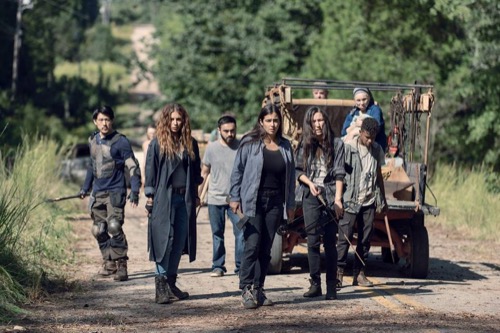 Tonight on AMC our favorite show The Walking Dead airs on an all-new Sunday, March 10, 2019, episode and we have your The Walking Dead recap below. On tonight’s The Walking Dead Season 9 episode 13 called, “Chokepoint,” as per the AMC synopsis, “Daryl’s daring rescue mission forces Alpha to unleash a group of her own to retrieve what belongs to her, even if the price is paid in blood. Meanwhile, the Kingdom’s plans to reunite the communities are put in jeopardy.”

Daryl, Henry, Lydia, and the others find their way to safety after running from the Whisperers. They stop to talk. Henry thinks they should run away that way Hill Top cannot be blamed. Daryl tells him no, think about his mother.

Beta speaks to one of his men who is changing after being bit. After he tells some of his people that they plan to get Lydia back. She will walk again with them.

At the Kingdom, Carol walks the grounds with another woman. The fair is here and they are excited. Jerry returns. They see his facial wounds. He tells them how they were intercepted by a group who call themselves the Highwaymen. They need to protect their roads as Tara and the others are coming to the fair.

Tara and the gang come across a road covered by large branches. They start to clear. Meanwhile, Daryl and the gang make their way back home. Lydia tells them that her mother will most likely send Beta to find her. He is their best, she tells Daryl who declares “good, we will kill him first.”

On the wall, Carol tells Ezekiel that maybe the fair is a bad idea. They get into a discussion with Jerry and the others all on the lookout. Carol wants to talk to these pirates first and then if they don’t listen they will kill them and protect the Kingdom.

Daryl and the gang have arrived at a building. Connie tells him she stayed there once. She has an emergency stash. They look around. Daryl thinks they have a good plan. He tells Connie the girl stays after. They fight about this.

Ezekiel, Carol, and the gang meet with the Highwaymen. They flex their muscles and show that they are more powerful. They offer the men a deal – keep the roads safe and they can come to the Kingdom and the fair. The leader laughs until Carol offers them a movie. They cannot believe it.

Henry brings Lydia a spear as they nail boards to the windows. She doesn’t want the weapon. These are the people who looked out for her most of her life. They talk. She asks him why he came to get her. He cares for her. They kiss. Daryl interrupts.

Tara and the gang have wagon troubles. Walkers approach. Things get out of hand until the Highwaymen arrive to save the day. They tell Tara and the others that they are there to escort them safely to the fair.

On watch at the top of the building, Lydia and Henry watch as a group of walkers approach. Beta walks in the middle of the group. Daryl picks one off, hitting an actual walker. They keep coming. They make their way into the building and whisper their plan to split up. Daryl makes Lydia hide as they get ready to fight. Several walkers make their way in the door that leads to them. Henry takes one out while Connie takes another. Daryl fights several on the other side of the building. Henry gets stabbed by another while Lydia listens from the other room in hiding.

She breaks out and rushes to him with Dog who attacks another one of their enemies. Daryl comes face to face with Beta who whispers that all he wants is the girl. They fight, exchanging violent blows. Beta throws Daryl around who holds his own, stabbing him in the chest. Beta doesn’t flinch but gets angry. Daryl jumps through a thin construction wall and drops down into a hidden compartment in the floor. He jumps out at Beta and pushes him down an elevator shaft.

At the Kingdom, Tammy tells Earl she cannot give up the baby as the fair gets underway. Tara hugs Carol and Ezekiel, asking where Henry and Daryl are. They are supposed to meet me here, she tells them. Meanwhile, Daryl and the gang get Henry up and moving as they leave. Beta comes to at the bottom of the elevator shaft.