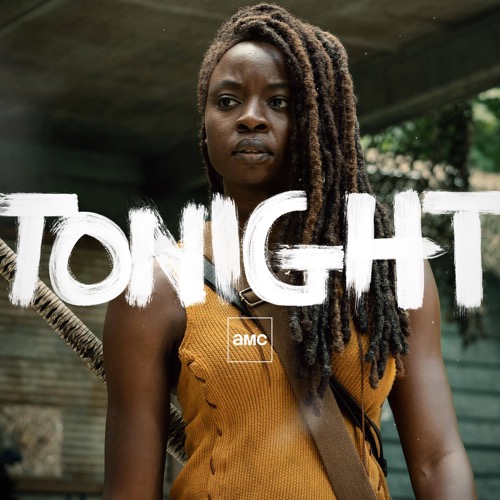 Tonight on AMC our favorite show The Walking Dead airs on an all-new Sunday, November 24, 2019, premiere episode and we have your The Walking Dead recap below. On tonight’s The Walking Dead Season 10 Episode 8 called, “Open Your Eyes,” as per the AMC synopsis, “Carol pushes boundaries that make Daryl uncomfortable. Alpha and Beta have reservations about someone.”

On tonight’s TWD Alpha is with Dante, she tells him he did well and now she needs more, eyes and ears inside that wall; her daughter doesn’t know him. He asks her where to start, she says find some strangers and join them. Dante is dressed as a whisperer, but when he sees some people he takes off his mask and acts like he is being attacked. The people save him, we see Siddiq tend to him – then we see him taint the water which makes the people of Alexandria sick. Alpha tells him to gain their trust.

We see Dante finishes killing Siddiq, he closes his eyes and raises a knife but stops when Rosita walks in with the baby. She asks him what is happening, he sais they were just hanging and Siddiq got called out because somebody was sick, she just missed him. Then Dante asks if he can help with anything. In the meantime, because Dante didn’t stab Siddiq in the head, he has turned. Rosita knows something is up and goes after Dante. She had placed the baby in a tub, Siddiq comes out of the room and goes right to the baby. Rosita stabs Siddiq in the head and beats Dante to a pulp. She then takes the baby, Siddiq is bloodied on one floor and Dante on the other.

Aaron has a visit by his whisperer, she asks him if the baby is still alive, he says yes – she says he is her nephew. She wants to know if he has a name, he tells her Adam. She asks if she can see him, he says her people left him to die. She offers information to trade for her to see him. She says it is the only family she has left, Aaron says that she better tell the truth then. Aaron tells her to take off her mask, she does, her name is Mary.

Daryl continues beating Dante, Carol is there, Gabriel and Rosita. Dante tells them he liked Siddiq and he wasn’t part of the plan, and he is going to enjoy to watch what they are going to do to him. Dante says no one is actually kind, we are selfish and brutal. Rosita kicks Dante in the back and knocks him to the floor. Aaron arrives and he is shocked to find about Dante. Aaron said he treated Grazie, Carol tells him not to do that to himself. Aaron says that Mary told him where Alpha is keeping the herd; it’s in a sunken field. Aaron reveals how the baby, Adam, is Mary’s nephew.

Michonne and Judith are traveling, ahead of them are fresh tracks from someone, and not walkers because the footprints are not dragging. They stop in a library, Judith picks up a book for Eugene. Michonne walks through the aisles with Judith and she sees a book that she always wanted to read. Someone radios Michonne, she finds out that Siddiq is dead and they leave the library.

There is a funeral for Siddiq at Alexandria, Gabriel does the service. Rosita kneels down beside his grave. Carol sees Ezekiel, he says he is shocked that Siddiq is dead. Then he offers if they need any help going after Alpha’s head. Rosita then goes out and a couple of walkers come after, she kills them – Eugene witnesses it and runs to help. He gives her his deepest condolences for Siddiq.

Gabriel is watching Dante’s video when Rosita walks in. Rosita tells Gabriel that she cannot die, the baby will become an orphan and she is afraid. Gabriel tells her to listen to the problems at hand. She says maybe Dante was right about them, they are not as strong as they think they are.

Back to Michonne, she is at Oceanside. All of a sudden, people come in and they have a man apprehended, Michonne goes up to him and asks who are his people. Then we hear walkers, they are everywhere, Michonne and a group of people go after them – she is shocked by how many there are.

Gabriel goes to see Dante and asks him if he even has a son, Dante asks if it even matters. Gabriel opens the door and goes inside. Dante tells him to look around him and see what people did to the world, does he think they deserve a second chance. Gabriel says he loved Siddiq and now his daughter will not know his father and maybe Rosita won’t forgive him. Gabriel then lunges towards Dante and stabs him, Dante tries to push back and Gabriel keeps stabbing him. Dante is dead, Gabriel starts crying and looks down at his bloody hands.

At Oceanside, the man tries to escape and Judith stops him by slashing his leg.

Rosita is walking the baby, she sees Gabriel come out of the stairs from where they were holding Dante, and his hands are all bloodied.

Gabriel is standing near a fire, Rosita comes beside him and lays her head on his shoulder.

The man who was captured at Oceanside is waking up, his hands are bound and his leg is sore. Judith is beside him and reading a book. He tells her that the book is for his daughter and she has to put it back. He lunges at her but can’t reach her. She tells him to be careful, he is going to rip his stitches. Michonne walks in and asks Judith to give them a minute. Michonne asks the man what he is really doing there. He says he doesn’t want to hurt anyone, he left home to get supplies and he is heading back there.

Michonne asks him where home is. He says he can’t, his family is there and he wants to keep them safe. He tells her where he lives, and says it is hard to find. Michonne tells him that she owes Oceanside for all the damage he did and he is going nowhere until that is figured out.

Michonne goes to see Judith and tells her that the man lives on an island, there are weapons there that are big enough to kill a heard, and she would have to go check it out, alone, not with Judith. Judith tells her it is ok, they can’t lose anyone else.

Daryl, Carol and the rest look into the area where Mary said the herd was, they are not there. Daryl tells Aaron it is time to find Lydia.

Michonne tells the captured man that any weapons she can take from his island will pay off his debt. He is surprised it is that simple and asks for this stuff back. Michonne hands everything to him, he extends his hand, says he is Virgil, she shakes his hand.

Michonne prepares to leave with Virgil, she gives Judith a walkie talkie and tells her she can check in every day. They hug, Michonne goes off in a sailboat with Virgil.

Daryl, Carol, and the crew are walking when Carol sees something, it is Alpha. Carol runs towards her, Aaron, Daryl, Connie and the rest run after her. Daryl shouts Carol’s name, but she is not stopping. Walkers are around, Daryl stops to kill some and loses track. He enters a dark tunnel with two knives raised, he calls for Carol and falls down into a hole. Where he is fallen, he finds everyone else, including carol and thousands of walkers just below them. They have finally found Alpha’s horde.