The Young and the Restless Spoilers: Adam & Chance Scheme To Get Katherine’s Money – Devon’s Fortune At Risk

BY hellodrdavis on August 26, 2019 | Comments: one comment
Related : Soap Opera, Spoiler, Television, The Young and the Restless 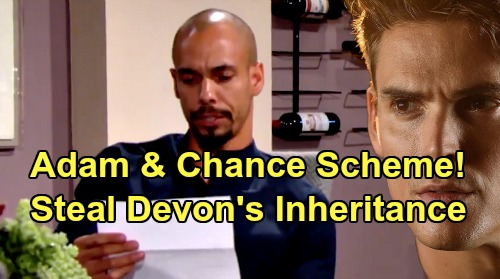 The Young and the Restless spoilers tease that Devon Hamilton (Bryton James) will soon be in for an unpleasant surprise. In the Y&R promo for the week of August 26, Devon is shown receiving a letter informing him of some “discrepancies” regarding the will of Katherine Chancellor (Jeanne Cooper). Of course, Devon received his fortune from Katherine’s estate, so any problem with her will and how she bequeathed her assets could potentially rip some of Devon’s fortune away if things go wrong.

But what could the discrepancies with Katherine’s will possibly be? It’s been six years since Katherine’s death, so quite a bit of time has passed, and it seems that the time for any problems with her will to be discovered are long past. Nevertheless, something’s awry with Katherine’s estate, and it looks like it’s about to cause Devon some serious problems.

But what could be going on behind the scenes with Katherine’s will? It seems that Katherine’s decision to leave Devon her $2 billion plus fortune to Devon was clear-cut, but what if someone is contesting the will now? We can’t help but wonder whether this could have something to do with Chance Chancellor (John Driscoll), who had dealings with Adam Newman (Mark Grossman) back in Las Vegas.

Y&R never really explained what the whole Chance/Adam connection was in Las Vegas. At one point, Phyllis Summers (Michelle Stafford) had come back from Las Vegas and seemed to be holding some information about Adam’s association with Chance over Adam’s head. But neither Chance, nor Adam’s association with Chance, has been mentioned lately on the show, and it’s unclear whether the whole Chance angle has been dropped, or if something involving Chance could be lurking.

Well, what if the issue with Katherine’s will somehow involves Chance? Adam and Devon have had a few tense scenes lately, and they clearly don’t get along. Plus, Adam seems to be in need of assets since Victoria Newman (Amelia Heinle) and Phyllis recently bled Dark Horse dry out from under him. Perhaps Adam and Chance are in cahoots somehow to get their hands on Katherine’s fortune.

If that’s the case, then perhaps the issue with Katherine’s will now is that Chance is contesting it, in an effort to get his hands on some of her money. This sounds like something that Adam could be behind, and we could see a huge fight ensue for Katherine’s money. Of course, it would be tricky since Devon’s already been awarded the money, but Chance could claim that some or all of it is his and come after it.

We just might see Devon with a real fight on his hands. Of course, Adam doesn’t have a huge grudge against Devon the way he does with the Newmans, but if he needs some money to fund his takedown efforts against his family, then we wouldn’t put it past him to partner with Chance to get access to Katherine’s money. Adam certainly wouldn’t feel any qualms about ripping the money away from Devon!

It will be interesting to see what or who is behind the “discrepancies” in Katherine’s will and how it ultimately affects Devon. We suspect that he might have quite the fight on his hands! Do you think that Chance and Adam are scheming to get their hands on Katherine’s money? Stay tuned to the CBS soap and don’t forget to check CDL often for the latest Young and the Restless spoilers, updates, and news.