BY Marcy Cohen on May 26, 2019 | Comments: Leave Comments
Related : Soap Opera, Spoiler, Television, The Young and the Restless 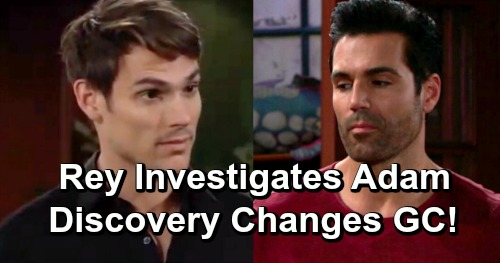 The Young and the Restless (Y&R) spoilers tease that Rey Rosales (Jordi Vilasuso) will be on a special mission soon. He’ll be instructed to keep tabs on Adam Newman (Mark Grossman), and he’ll be paid handsomely for it. Someone in Genoa City will want to know exactly what Adam’s up to, so Rey will do his best to get the job done. Of course that someone will be Nick Newman (Joshua Morrow)!

Of course, Rey’s interest in this case will also be personal. The more Rey hears about Adam, the less he may trust him. Rey may view Adam as a threat to his relationship as well. That’ll turn out to be true, but not in the way Rey thinks. Rey’s investigation itself could be a bigger problem than the lingering connection between Adam and Sharon Newman (Sharon Case).

Whatever the case, Rey’s assignment will lead him to start digging in Adam’s past – not the one he had years ago in Genoa City but his recent one as “Spider.” Why might Rey find as he seeks the truth? Is this guy even really Adam?

Now that Adam has his memories back, he certainly seems to know a lot about Adam’s life. However, that could all be an act. Anyone can pull that off if he or she’s done the necessary research. Victor Newman (Eric Braeden) is apparently convinced this Adam is the real deal, but it wouldn’t be the first time Victor’s been wrong about something. Perhaps he just wants so badly to believe it’s true.

It’s possible Rey will follow the clues and discover this man is an imposter. Sharon would likely react with disbelief, which could lead to the “Shey” conflict that Young and the Restless spoilers point to. From the moment Sharon saw Adam again, she knew it was him. Even before that, Sharon felt Adam’s presence in the park. If this is just someone posing as Adam, Sharon will definitely struggle to believe it.

However, this is the same woman who at first fully believed “Sully McAvoy” was her baby and not Christian Newman (Jude and Ozzy McGuigen). Sometimes things aren’t as they seem on soaps, so Sharon may have been duped along with the audience.

Fortunately, it’s doubtful Y&R would waste an excellent casting find like Grossman on an imposter alone. The real Adam must still be out there if this one’s a phony. There’s also a chance Rey could uncover something completely different as he digs around. Whatever it is will leave Adam in a bind!