The Young and the Restless Spoilers: Adam Newman Discovered Alive and Well, But Does He Know Who He Is?

BY Heather Hughes on April 12, 2019 | Comments: one comment
Related : Soap Opera, Spoiler, Television, The Young and the Restless 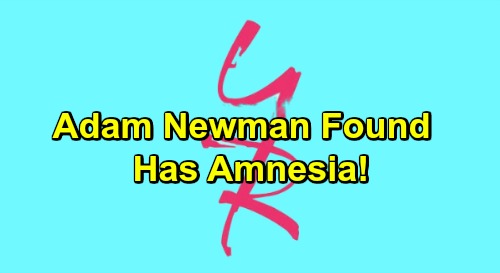 The Young and the Restless (Y&R) spoilers tease that a shocking discovery will be made. Mark Grossman has been cast as the new Adam Newman, so he’ll be headed to Genoa City eventually. Victoria Newman (Amelia Heinle) has struggling to make sense of Victor Newman’s (Eric Braeden) mysterious meetings, but there’s a chance this involves an Adam hunt.

We also know Greg Rikaart will reprise his role as Kevin Fisher this spring. His skill could come in handy as Victor seeks out his previously presumed dead son. Perhaps some clue surfaced that alerted Victor to Adam’s survival. He’s got eyes and ears everywhere, so Victor tends to know what’s up.

Even if Adam is located another way, he’ll inevitably come back into the picture. That’ll bring up some great questions since Adam’s been gone for so long. Where has Adam been? Has he stayed away intentionally? Does Adam even know who he is? The Young and the Restless spoilers say there’ll be plenty of possibilities to explore.

Amnesia might be a good route to take since it’d explain why Adam never sought out Chelsea Newman (Melissa Claire Egan) after the explosion. Adam would’ve needed some recovery time if he was injured, but he still would’ve reached out to his love if he could. Once Adam had his strength back, it would’ve made sense for him to contact Chelsea and try to run away together like they planned.

Since Adam didn’t do that, there are seemingly only three options here. One is that someone held him captive and he wasn’t allowed to get in touch. However, that’d require including a mystery villain in this story and might make things too messy. We just wrapped up all the J.T. Hellstrom (Thad Luckinbill) stuff, so Y&R may want to keep Adam’s comeback simple.

Another option is that Adam reconsidered building a new life with his family and took off on his own. He might’ve thought Chelsea and Connor Newman (Gunner and Ryder Gadbois) would be better off without him. Of course, that version of the story doesn’t have as much impact since Chelsea and Connor aren’t on canvas. They could be eventually, but they won’t be there from the get-go.

The last possibility is that a head injury forced a memory-less Adam to live as someone else. That would be a nice strategy since it might change Adam’s personality a bit. We’ll all have to get used to the recast, so it would free Grossman up to give Adam his own spin at first and find his Newman groove later.

Do you think Adam has amnesia somewhere? Is that why he’s steered clear of GC all this time? Does Adam have no idea who he really is? The Young and the Restless spoilers say the excitement’s about to rev up, so stay tuned. We’ll give you updates as other Y&R news comes in. Stick with the CBS soap and don’t forget to check CDL often for the latest Young and the Restless spoilers, updates, and news.