BY Sean O'Brien on May 12, 2019 | Comments: one comment
Related : Soap Opera, Spoiler, Television, The Young and the Restless 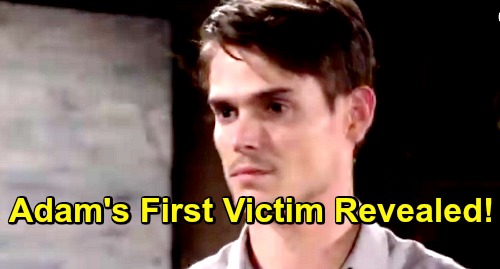 The Young and the Restless spoilers tease that Adam Newman’s (Mark Grossman) return to Genoa City is very unpredictable. Fans will learn if he believes that any of his family members were involved with Chloe Mitchell (Elizabeth Hendrickson) in trying to kill him!

Assuming that Y&R writes Adam as dark as he seems to be in this latest revival tale. Well then Victor Newman (Eric Braeden) better watch his back. In truth, the Moustache made full amends with his son, as then played by the departing Justin Hartley in the fall of 2016. But maybe Adam thinks otherwise now?

The blow-up scene was actually engineered by Chloe. She worked alone in an attempt to permanently eliminate her enemy; the man she’s never forgiven for having accidentally struck Delia Abbott (Sophie Pollono) down with his car on that dark and deadly night earlier this decade.

Following on this plot path, Victor and Kevin Fisher (Greg Rikaart) are the only people, other than Bella Mitchell (Cali May Kinder), who know that Chloe isn’t dead, as the world thinks she is. This stands as a main reason Adam could use to target his father.

Okay, let’s take Adam’s revenge plans down a notch. Instead, assume some real memory loss and the connection to Christian Newman (Jude and Ozzy McGuigen), as telegraphed by Nick’s (Joshua Morrow) recent play time with his son. Well, Christian is his nephew, as Adam may recall.

If Adam’s return to GC is followed by a full recovery, he’ll want full access to his second son either immediately, or eventually. That seemingly settled paternity matter has mined numerous times before. But this time Y&R can allow the brother battled to play out, as Christian’s biology issue is known by all.

Sharon Newman (Sharon Case) is playing the point person in Victor’s attempt to unlock Adam’s memory. If the character Grossman now embodies is sincerely unable to recall his past prior to the cabin blast, then Sharon may be targeted first. The Shadam link might not prove to be positive, as hoped.

She’s the one who’s looking to deep-dive into his fragile emotions. If Adam is not fully aware of his own reality, then he could also be hair-trigger dangerous.

Y&R fans know that Melissa Claire Egan (Chelsea Newman) is already back with the cast. Her return scenes will actually soon be shown.

If Adam doesn’t know who he is, then Chadam won’t even be a memory. But the sight of Connor Newman (Gunner and Ryder Gadbois) could enlighten Adam’s mind, which may put Chelsea and Chadam’s son in jeopardy.