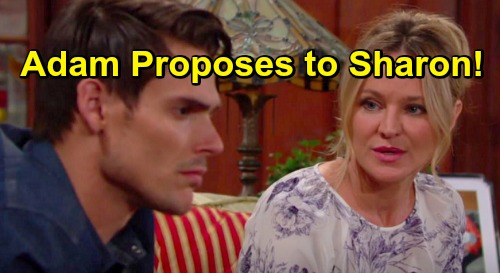 The Young and the Restless (Y&R) spoilers tease that Adam Newman (Mark Grossman) will make a bold move, and he could have several motives. It looks like a proposal is brewing in Genoa City. Kyle Abbott (Michael Mealor) and Lola Rosales (Sasha Calle) are set to wed, but there’s another non-couple who could be headed to the altar – at least if Adam has anything to say about it.

Y&R fans know Adam and Sharon Newman (Sharon Case) recently hooked up. His inner bad boy appeals to Sharon, but her good heart balances things out. Sharon’s great at talking Adam down – at least in the moment. He always tends to blow up situations anyway, but maybe he wouldn’t if he had someone firmly in his corner. Could a loving, supportive wife be just what Adam needs?

The Young and the Restless spoilers hint that Adam may want to find out. It seems Adam will pop the question during the week of August 19-23. Now you’re probably thinking this is way too soon, especially since Sharon lashed out at Adam after their sex session. Rey Rosales (Jordi Vilasuso) caught Sharon at the penthouse, so she decided Adam had set her world on fire and needed to stay away.

Adam and Sharon aren’t even dating, so why would he want to propose? There are a few reasons to consider. For starters, Adam is a master manipulator who enjoys leaving Sharon flustered. It’s part of the thrill for him. Adam is always fighting for control around town, and Sharon is one of the few people he can usually influence. Everyone else is firmly aboard the “Adam is a sociopath” train.

Another reason is that this would stick it to Nick Newman (Joshua Morrow), who clearly cares about Sharon. Nick shares children with her and she’s arguably the love of his life. After all the chaos that’s been unleashed, Nick would loathe the idea of Sharon and Adam tying the knot. It might spark some jealousy for Chelsea Newman (Melissa Claire Egan) as well, which Adam would appreciate.

However, the most important reason for a proposal might be Christian Newman (Alex Wilson). Victor Newman (Eric Braeden) made sure a restraining order was filed, so Adam can no long visit his son. Nevertheless, the bigger concern is the next court date. Adam wants a long-term victory here, so he might want to present himself as a family man. He could do that with Sharon’s help.

Of course, Sharon was why Nick temporarily lost custody to Victor at one point. Her past problems were used against her, but the show’s pretty much ignoring that now. Nick alluded to an issue with someone he was living with when the judge asked, but that was that.

Sharon was a viable option when she stood up for Adam as a temporary guardian candidate. Christian ended up with Victoria Newman (Amelia Heinle), but Sharon was still considered. She also served as a mom to Christian for a huge chunk of his life. Since Sharon adores Christian, Adam can use that to prey on her emotions.

Will Adam convince Sharon that Christian should be with his bio dad? Will Nick keep showing his true colors and convince Sharon himself? Will Sharon actually agree to marry Adam?