The Young and the Restless Spoilers: Adam’s Kidnapping Plot, Christian at Risk – Y&R’s Bad Boy Proves He Can’t Be Trusted?

BY Heather Hughes on May 13, 2019 | Comments: one comment
Related : Soap Opera, Spoiler, Television, The Young and the Restless 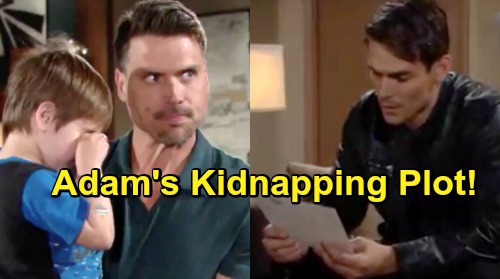 The Young and the Restless (Y&R) spoilers tease that Adam Newman’s (Mark Grossman) return home will leave Nick Newman (Joshua Morrow) on edge. Protecting his relationship with Christian Newman (Jude and Ozzy McGuigen) will be what matters most to Nick. Christian may not be Nick’s son biologically, but he’s his son in all the ways that count.

However, Adam’s comeback already seems very focused on Christian. That was the only picture Adam kept out of the envelope Victor Newman (Eric Braeden) provided. On Monday, Adam even contemplates that photo before deciding he should return to Genoa City. Whether Adam’s memory loss is legit or not, there’s a connection between this father and son.

The Young and the Restless spoilers say that could bring some dangerous moves during Adam’s comeback storyline. Y&R’s weekly promo shows Adam with a giant bag of cash, which Sharon Newman (Sharon Case) finds concerning. Adam will likely downplay it, but what does he plan to do with all that money? Could Adam hope to snatch Christian and make his getaway?

In Monday’s episode, Adam makes it clear that he’s not interested in knowing the people from his past or recapturing the person he used to be. If that’s true, what’s to stop Adam from kidnapping Christian and going on the run? To take that idea a step further, what if Adam is indeed faking his amnesia? That could open the door to some interesting possibilities involving Chelsea Newman (Melissa Claire Egan).

Before the explosion derailed everything, Adam planned to build a new life with Chelsea and Connor Newman (Gunner and Ryder Gadbois). They were going to leave GC behind and live happily ever after. Could Adam still want to make that dream come true – just with the inclusion of Christian this time? If Adam is only pretending he has no memories, that’d be perfectly reasonable.

Adam and Chelsea have always been the couple that fights their way back to each other, so maybe they’ve secretly done that already. After all, Chelsea is also headed back to Genoa City this summer. Whether Chelsea’s part of this or not, it’d bring some good drama if Adam at least tried to make a break for it with Christian.

Naturally, Adam would either be found with Christian or caught before he ever had the chance. Still, a kidnapping attempt would prove he’s the risky, untrustworthy person everyone claims he is. Y&R is really pushing this bad boy angle hard, and that won’t work unless Adam does something to back it up.

Adam might prefer to skip a custody battle or worry that things wouldn’t go his way. He’s someone who apparently thrives on taking gambles these days, so he could get a thrill out of this. It would also provide a strike against Adam when the legit courtroom war ultimately arrives. Then again, Adam could wait until he loses that battle and take matters into his own hands.