The Young and the Restless Spoilers: Alice Hunter Confirms Y&R Exit as Kerry Johnson – Reveals Reason She Got Fired 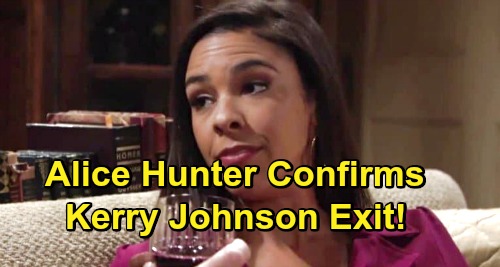 The Young and the Restless (Y&R) spoilers reveal that one CBS soap star is headed for the exit door, but her character will cause quite a stir as she goes. As the buzz about Alice Hunter’s (Kerry Johnson) departure got too loud to ignore, she finally confirmed the news on Twitter. Hunter wanted to fill everyone in on what to expect and show her appreciation for her time at Y&R.

The cast and crew gave Hunter a big farewell party after she wrapped filming. Their support blew her away and left her even more grateful. “To all asking – yes, Kerry is taking an indefinite hiatus,” Hunter said. “She earns it though…you’ll see soon enough. I LOVE the arc, even if I’m sad to leave. And yes, a bunch of #YR cast & crew surprised me Friday and it was something I’ll never forget.”

Hunter got plenty of tweets from Young and the Restless fans after her announcement. She sent out tons of replies to thank everyone for their kind words. Hunter also received several questions about why she’d been let go, so she offered an answer. It’s clear that Hunter has no hard feelings and is open to retuning down the road.

“With the regime change and some awesome vets in need of screen time, I’m happy to move aside for the time being,” Hunter said. “We’ll see what happens in the future! I plan to work…a lot.” Hunter also noted that some fun comebacks are in the works, so that’s something to look forward to. Despite her looming exit, she seems excited about what’s next.

“Things shift and I understand,” Hunter said. “I think the show is heading in a positive direction though! And I leave in a very interesting way…” Honestly, Hunter needs to teach a class on how to get fired! She’s been so respectful of Y&R’s needs and the fact that they need to make a little extra room on canvas.

Some soap stars have been known to be divas if they’re given the boot, but Hunter gets that it’s nothing personal. There are just too many newer characters at the moment, so some of them have to go. Maybe Y&R can find a way to work Kerry back in the story at some point – especially since a big reveal is brewing.

Will Kerry’s exit tie in with the J.T. Hellstrom (Thad Luckinbill) turmoil? The Young and the Restless spoilers say a twist will set up Kerry’s departure, so fans will be eager to see how it all plays out. We’ll give you updates as other Y&R details emerge. Stay tuned to the CBS soap and don’t forget to check CDL often for the latest Young and the Restless spoilers, updates, and news.

My mentors. My friends. This journey has been indescribable. #YR pic.twitter.com/mZdjLrVYmm