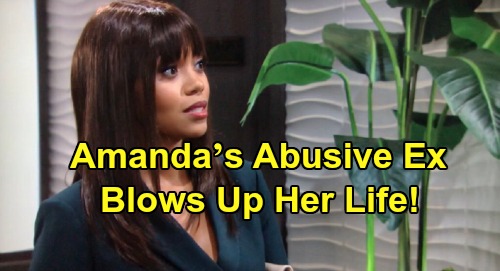 The Young and the Restless (Y&R) spoilers tease that grave danger could strike once again in Genoa City. Y&R fans know Amanda Sinclair (Mishael Morgan) is a pretty secretive person. There have been moments when Nate Hastings (Sean Dominic) encouraged Amanda to open up, but she’s never been quick to offer much info.

However, The Young and the Restless is finally peeling a few layers back, which is nice since Amanda’s run has been rather “blah” so far. Mishael Morgan is a talented, dynamic actress who always stole the show as Hilary Hamilton. Unfortunately, Y&R hasn’t quite achieved the same effect here. Amanda has an attitude like Hilary did, but she doesn’t have the same spark – at least not yet.

Hilary was a real piece of work at times, but her scheming and wit made her a fascinating character. She had a softer side when it counted, but Amanda just seems cold and detached. Thankfully, it appears there’s a good reason for the walls Amanda’s put up. She was quite rattled by the recent lockdown at the Grand Phoenix, which led Cane Ashby (Daniel Goddard) to wonder where she’d been locked up and who put her there.

Cane also suggested Amanda’s old life would eventually catch up with her. Y&R fans will recall that moment where Amanda seemed shaken by someone at the hotel. She mistook a man in the lounge for someone else – presumably an abusive ex. Amanda also has a tracker on someone and virtually no online presence at all. It’s clear that she doesn’t want to be found by this man in particular.

Of course, that means this guy will inevitably make his way to GC. That’ll give someone a chance to swoop in and save the day. Will it be Nate? It would make sense considering the show’s apparently building to a Nate and Amanda romance. It’d be the perfect way to kick things off for them as a couple.

Amanda could find herself cornered and facing some fierce threats. Nate could put his own life on the line if he steps in, but that’s certainly a risk he’d be willing to take. The Young and the Restless spoilers say Amanda’s past will definitely catch up with her – just as Cane predicted. Let’s just hope Nate can come to Amanda’s rescue when the brute arrives!

It sounds like some hot drama’s looming in Genoa City. We’ll give you updates as other Y&R news comes in. Stay tuned to the CBS soap and don’t forget to check CDL often for the latest Young and the Restless spoilers, updates and news.