BY hellodrdavis on February 3, 2019 | Comments: one comment
Related : Soap Opera, Spoiler, Television, The Young and the Restless 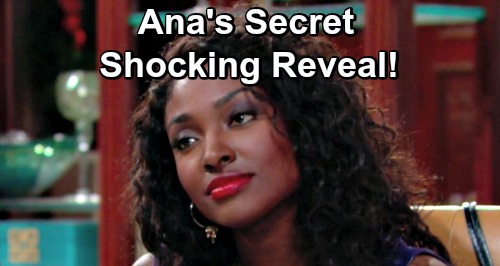 The Young and the Restless spoilers tease that Ana Hamilton (Loren Lott) has something to hide. Ever since she returned to Genoa City, she’s been circumspect about her past, and no one has asked her many questions about what her life was like while she was away. She easily blended into Devon Hamilton’s (Bryton James) life and his business and has tried not to attract much attention to herself.

But Ana’s a very talented person, with both songwriting abilities and performance talent. And it was only a matter of time before Devon noticed. He overheard her perform one of her pieces at the piano recently and he was moved to tears by it. And now he’s pushing her to come out as a writer and even perform her own songs.

But Ana’s highly resistant to being in the spotlight. She wants to use a stage name as her writing credit, and she’s completely against the idea of getting back on stage as a performer. However, thus far she hasn’t provided a single good reason for why she wants to shun the spotlight.

This suggests that she’s got something to hide. One possibility is that she’s got money problems. She mentioned to Devon that she had debt from living the high life on her credit cards, but that’s hardly a reason to avoid fame. Perhaps she owes money to a loan shark, and she’s trying to hide and keep a low profile from him. That might explain why she doesn’t want her name getting out there.

Or perhaps Ana made some enemies in the music business before she came to Genoa City. She told Fenmore “Fen” Baldwin (Zach Tinker) that she had been burned by another label after she mistakenly signed away the rights to some of her music. Maybe there’s more to that story, and she doesn’t want her bad past professional relationships to come to light and rub off on Devon’s company.

Or there’s always the possibility that there’s someone, like a former love, who Ana doesn’t want to find her. It’s always possible that Ana has or had a stalker who she’s running from. That would be motivation for her to keep her name out of the spotlight.

Whatever Ana’s secret is, it’s big enough to keep her from doing what she clearly loves – writing prolifically and performing. What do you think her secret could be? Stay tuned to the CBS soap and don’t forget to check CDL often for the latest Young and the Restless spoilers, updates, and news.