BY Heather Hughes on December 31, 2019 | Comments: one comment
Related : Soap Opera, Spoiler, Television, The Young and the Restless 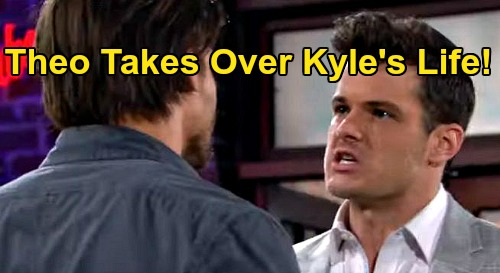 The Young and the Restless (Y&R) spoilers tease that Ashley Abbott (Eileen Davidson) will continue to pop up in 2020. It’s been fantastic to see Ashley make these mini return stints – it’s even more fantastic to know they’ll continue! However, Jack Abbott (Peter Bergman) may not approve of Ashley’s reason for an upcoming visit. It turns out Ashley will come home with some unfinished business to settle.

Y&R fans know Ashley connected with Theo Vanderway (Tyler Johnson) during their first meeting. She could relate to Theo since they’re both tied to the Abbotts without being true Abbotts. Theo also impressed Ashley with his knowledge and ambition, so she offered him a job on the spot. That led to Jack scooping Theo up for the Jabot office in Genoa City instead.

Nevertheless, the battle for Theo may not be over just yet. As Theo’s feud with Kyle Abbott (Michael Mealor) revs up, Ashley may offer him another chance to escape the drama. She might sweeten the deal with more money and a better position than she offered before.

Ashley might hope that by the time she’s through with Theo, there’ll be no way he can refuse. After all, Theo’s putting in some hard work and seemingly coming up with good ideas. Ashley may feel like Theo’s talent is being wasted under co-CEO’s Kyle and Jack. She might argue that due to Theo’s bad blood with Kyle, Theo’s not being used to his full potential.

This could start the bidding war for Theo all over again. The Young and the Restless spoilers say Jack will find himself struggling to keep the peace after a huge shift of power. It sounds like more leadership changes are brewing at Jabot. Will Jack decide to step down and let Theo give the co-CEO seat a spin?

It seems outrageous to promote Theo that fast, but Jack might get desperate. He appears to view Theo as one of his last remaining links to Dina Mergeron (Marla Adams). By helping Theo, Jack may feel like he’s doing what Dina would want. He might believe this is the only thing that’ll keep Theo from bolting to Paris, which would hinder getting to know Theo any better.

Furthermore, Jack might view this as a way of forcing Theo and Kyle to come together. He may think he can cut down on the rivalry if they’re true equals in the boardroom. Of course, Jack would want to monitor the situation closely and do this on a trial basis. Still, having Theo and Kyle as co-CEOs would make sense considering their feud is set to explode in 2020. They’ll need something to be the final straw.

If Jack does promote Theo, you can bet Kyle’s going to be furious. Summer Newman (Hunter King) suggested that Theo wanted Kyle’s whole life – and she may be right. Can you imagine if Theo swoops in to score the same job AND ultimately steals Lola Abbott’s (Sasha Calle) heart?!