BY Heather Hughes on July 11, 2019 | Comments: one comment
Related : Soap Opera, Spoiler, Television, The Young and the Restless 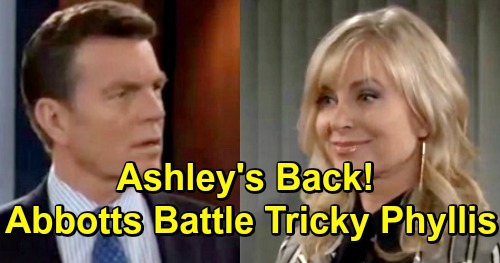 The Young and the Restless (Y&R) spoilers tease that Jack Abbott (Peter Bergman) will make plans for a spur-of-the-moment trip. He’ll decide to pay Ashley Abbott (Eileen Davidson) a visit, so he’ll deliver orders to gas up the Jabot jet. It won’t be long until Jack’s plane lands in Paris and he’s greeted by his curious sister.

Ashley will suspect there’s a reason for this visit beyond just wanting to catch up. However, she’ll show Jack around her company before they get down to the nitty-gritty. Y&R spoilers say Jack will get the grand tour and congratulate Ashley on the success of My Beauty. She’s made quite a name for herself in a short amount of time, so that’s something to be proud of.

Of course, Ashley pulled some dirty moves to land in this successful position, but that’s all in the past. Neil Winters’ (Kristoff St. John) death and Dina Mergeron’s (Marla Adams) decline have helped these siblings understand what’s important. Life is short and happiness can be fleeting, so you have to embrace joy where you can find it and cling to close bonds.

Jack and Ashley will hope to keep the positive energy flowing – and the real reason for Jack’s trip may help. It seems there’ll be some sort of Jabot crisis that needs to be addressed. There’s still a hint of tension between Ash and Jack on the business end of things. Fortunately, that’s an issue they can work through together. They just have to be honest about where they stand and form some new plans.

During an outdoor lunch, Ashley will push Jack to open up. He may admit he’s heading into a new season of his life and is ready to embrace change. The Young and the Restless spoilers say Jack will make a surprising decision that affects the whole family. It’ll change the dynamics of the Abbott clan, so it sounds like a Jabot-My Beauty merger is brewing. This could benefit both companies in the long run.

Jack may be desperate to thwart any vengeful strategies Phyllis Summers (Michelle Stafford) is cooking up. Ashley may be the only one who can help him, and it looks like she’ll be more than willing to. The Young and the Restless spoilers say fans can expect to see Ashley pop up again on July 18.

Are you looking forward to having Ashley back on your screen? We’ll give you updates as other Y&R news comes in. Stay tuned to the CBS soap and don’t forget to check CDL often for the latest Young and the Restless spoilers, updates and news.