The Young and the Restless Spoilers: Beth Maitland Celebrates Exciting Y&R News – Back in Opening Credits After Two Decades 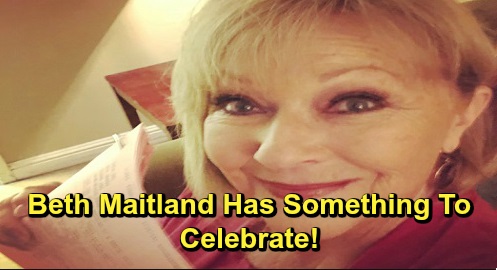 The Young and the Restless (Y&R) spoilers reveal that one CBS soap star has something to celebrate. Y&R fans have probably noticed some updates to the opening credits lately. Some stars like Melissa Claire Egan (Chelsea Newman) and Greg Rikaart (Kevin Fisher) have been added back in while we’ve seen others like Cait Fairbanks (Tessa Porter) and Sasha Calle (Lola Abbott) appear for the first time.

There are still more additions ahead – like Mark Grossman (Adam Newman), who recently confirmed he’d filmed his opening credit spot. However, there’s one star in particular that many fans were hoping to see. Many viewers have been asking when Beth Maitland (Traci Abbott) was going to be included again, and the opening of the episode airing September 24 grants that wish.

Maitland herself was thrilled enough to post about it on Instagram and share the link on Twitter as well. According to Maitland, it’s been two decades since she was featured in the opening credits of The Young and the Restless. That’s a shame since Maitland’s such a fan favorite and has deserved to be there all along. Still, it’s great that Y&R’s finally rectifying the mistake and giving Traci her rightful spot back.

“So excited to be back after over two decades in the opening credits,” Maitland said. “Thank you.” Maitland looks as lovely as ever in her dazzling reintroduction. Y&R’s opening credits are so glamorous, aren’t they? They’re a fun part of the show, and they’re made even more fun when we see beloved stars pop up again after being neglected.

It turns out Jason Thompson (Billy Abbott) is happy about Maitland’s inclusion, too. He caught his onscreen sister’s tweet about the opening and shared it with his own fans. Thompson included a kissing face emoji to let Maitland know she was loved. She naturally wanted to show Thompson a little love in return. A grateful Maitland replied, “Love you honey!!”

Of course, plenty of Young and the Restless viewers also wanted to chime in. One fan said, “Oh, this makes me so happy! Congratulations!” Another Y&R watcher insisted, “It’s about time, you’ve always been part of this show.” Maitland’s opening credits inclusion is a big deal to her as well as her fans, so this is fantastic news all around.

As for what’s next in Genoa City, The Young and the Restless spoilers Traci and Jack Abbott (Peter Bergman) will work hard on their passion project. The book they’ll write is sure to bring some surprises and unearth a few secrets about the Abbott family. We’ll keep you posted as other Y&R details emerge. Stay tuned to the CBS soap and don’t forget to check CDL often for the latest Young and the Restless spoilers, updates and news.

Canada today, US tomorrow. So excited to be back after over two decades in the opening credits. Thank you @youngandrestlesscbs @cbsdaytime @mattykane1 #tony marina #josh Griffith #grateful #actorslife