The Young and the Restless Spoilers: Billy’s DID Personality Tries To Kill Adam – Suffering From Dissociative Identity Disorder 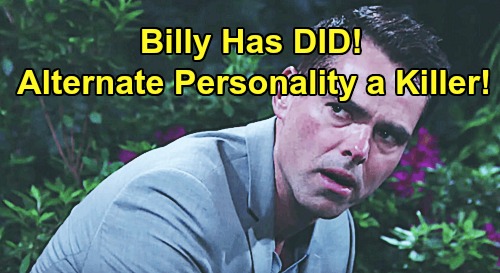 The Young and the Restless (Y&R) spoilers tease that we’ll finally get some answers in the mystery of Billy Abbott’s (Jason Thompson) issues. He’s been suffering from terrible nightmares and is overwhelmed by Delia Abbott’s (Sophie Pollono) lingering presence. There have been eerie, inexplicable coincidences as well as incidents that feel deliberate – like Delia’s doll being planted in Billy’s bed.

The story left fans wondering if Billy was really losing it or if someone might be gaslighting him. It turns out it’s both! The Young and the Restless spoilers say Billy is suffering from DID, dissociative identity disorder. He’s actually been gaslighting himself through an alternate personality, but he has no memory of what he’s doing.

This is an interesting twist that’ll set up even more shockers during the week of August 26-30. Y&R fans can expect Billy’s alter to break in Adam’s penthouse. He’ll get sneaky and steal a handkerchief that once belonged to Adam’s mother, Hope Wilson (Beth Toussaint).

Later, Billy will awaken elsewhere and wonder what’s going on. He won’t be able to recall any of his recent behavior, so he’ll feel like he’s losing it all over again. Billy just won’t understand any of this, so he’ll really be at the end of his rope.

However, Billy will ultimately reach into his pocket and pull out the handkerchief. He probably won’t have a clue what it is, but it’ll manage to trigger his alter once more.

The Young and the Restless spoilers say Billy’s alternate personality will be ready for a showdown. He’ll decide it’s time for Adam to pay the price for what he did to Delia.

Will Billy Abbott Pull Out A Gun And Threaten Adam Newman?

Adam will come face to face with his determined enemy – or at least this twisted version of him. Billy won’t be quite himself due to his DID, but all that matters is he’ll be a dangerous man!

There’s a good chance Billy will pull a gun on Adam and threaten to shoot, but another curve-ball is just around the corner.