The Young and the Restless Spoilers: Billy’s Affair While Victoria Vacations In Telluride – Spends Christmas With Amanda?

BY hellodrdavis on December 22, 2019 | Comments: one comment
Related : Soap Opera, Spoiler, Television, The Young and the Restless 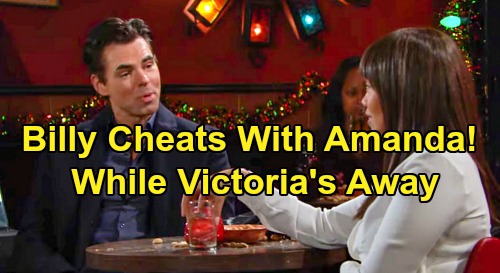 The Young and the Restless spoilers tease that Billy Abbott (Jason Thompson) has been struggling lately. He’s been dealing with self-esteem issues and there’s a side of him that just doesn’t feel like he’s worthy of the “perfect” family he’s a part of – and that includes both his nuclear family with Victoria Newman (Amelia Heinle) and his extended Abbott family. He’s been super-sensitive lately to all of Victoria’s comments about him being the perfect husband, and he just doesn’t feel like he measures up.

Right now, the only time that Billy really feels accepted and can escape from all the family pressure is when he’s at the little bar outside of Genoa City…and/or talking with Amanda Sinclair (Mishael Morgan). As Y&R viewers know, he and Amanda have struck up a comfortable friendship in recent weeks. They seem to accept each other “as is” and Billy just doesn’t feel all the pressure to be something he’s not with Amanda.

Of course, this all seems like dangerous path that Billy and Amanda are on. They’ve both proclaimed to each other that they’re not looking to have an affair, but clearly something Is going on between them – after all, it’s a secret relationship that Billy hasn’t disclosed to Victoria, which is a huge red flag.

And upcoming The Young and the Restless spoilers indicate that Billy may not even spend the holidays with Victoria and the kids after all, which can only mean one thing…more time at the little bar outside of Genoa City, and probably more time with Amanda. It looks like Billy will be feeling the pressure more and more as their Christmas trip in Telluride nears. He’ll likely be dismayed at the thought of pretending to be the perfect husband the whole time.

Well, Y&R spoilers say that Billy will find out at the last minute that a big deal that he’s working on for his new consulting company hasn’t closed, and that he needs to stay in town to get the deal done. Victoria will offer to delay their flight to Telluride, but Billy will ask her to take the kids and leave without him.

Although Victoria won’t want to leave Billy behind, it looks like she’ll do so, while Billy continues his internal struggle over not feeling like he can ever be the man she needs him to be. And that will leave Billy alone on Christmas Eve. One wonders what Amanda will be doing on that day, and whether the two will end up spending the evening together. Amanda has stated that she’s not much for holiday celebrations, so she could very well end up in the little bar alone…and with Billy.

We’ll see what happens and if Billy ends up finally joining his family in Telluride, but we suspect that there’s a good chance that he and Amanda may get together, since ongoing Y&R spoilers say that the two will continue to bond. Do you expect to see Billy and Amanda’s relationship evolve into an affair? Stay tuned to the CBS soap and don’t forget to check CDL often for the latest Young and the Restless spoilers, updates, and news.