The Young and the Restless Spoilers: Billy’s Rage Toward Kyle Out Of Control – Unresolved Anger Issues Threaten Abbott

BY hellodrdavis on November 17, 2019 | Comments: one comment
Related : Soap Opera, Spoiler, Television, The Young and the Restless 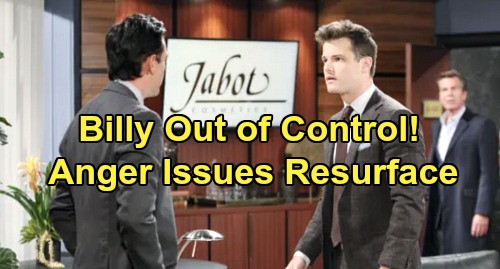 The Young and the Restless spoilers tease that Billy Abbott (Jason Thompson) is still struggling with unresolved anger. As Y&R viewers know, he seems to have put a lid on the feelings of resentment and animosity he had toward Adam Newman (Mark Grossman), and he’s seeking therapy for those issues. He’s even told Victoria Newman (Amelia Heinle) that he thinks he’s getting better and that he has a grip on his psychological problems.

But has Billy really worked through his issues as this point? After all, he suffered a serious break from reality when he experienced the dissociative episode in the boathouse. He was violent, and he’s lucky that he wasn’t put into inpatient care after it all happened. It probably wouldn’t be that unusual for him to experience future dissociative events down the line.

But both Billy and Victoria seem to think that he is doing well and working through his issues. But at the same time, Billy seems to be having some serious conflict at work that is driven almost wholly by him. He’s been angry and belligerent toward Kyle Abbott (Michael Mealor) for weeks, ever since Jack Abbott (Perter Bergman) put him together with Kyle at Jabot. Billy has thrown insults at Kyle seemingly ever since.

Of course, Kyle doesn’t have as much experience as Billy, but it seems that he’s done a great job in his role and he excelled when he filled in for Jack as the solo CEO a while back. And Billy has made his fair share of mistakes at Jabot in the past, so he really shouldn’t be judging. Yet he has diminished Kyle’s successes and made unilateral decisions, causing serious conflict with Kyle.

And then, after one such confrontation, Billy pulled out a stick of gum from his desk drawer. Fortunately, he threw the gum in the trash, indicating that he wasn’t devolving back into the “gum chewing Billy” that had tried to kill Adam. But clearly, he was getting close to that point. It seems like his anger might still be buried deep down inside and has been displaced from Adam to Kyle.

Of course, Billy doesn’t seem at all as violent as he did when he was in “anti-Adam” mode a while back, and he doesn’t harbor the terrible animosity toward Kyle that he did toward Adam, so he probably won’t get violent with Kyle, but still he’s been way out of line with his nephew, and that suggests that Billy’s got some serious unresolved issues and a lot of pent-up anger still lurking.

According to Y&R spoilers, Billy will soon recognize that his behavior toward Kyle may be inappropriate, which will be a positive step. He’ll even apologize to Kyle and resolve to try to do better. But the anger he’s got inside will have to go somewhere, so we could be looking at some more struggles with Billy going forward.

Do you think that Billy’s psychological ordeal will continue, and he’ll continue lashing out toward Kyle? Stay tuned to the CBS soap and don’t forget to check CDL often for the latest Young and the Restless spoilers, updates, and news.