The Young and the Restless Spoilers: Breaking Casting News – Brooks Darnell OUT, Sean Dominic IN as Dr. Nate Hastings 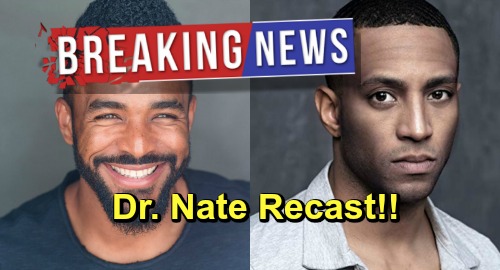 The Young and the Restless spoilers has some late breaking casting news to pass on. Brooks Darnell, who has portrayed Dr. Nate Hastings for nearly a year on the CBS soap, is out and a new actor will be taking over the role. That new actor is Sean Dominic, and he’ll be debuting in the role on Wednesday, April 10.

There’s not much information known about the circumstances surrounding Brooks’ exit from Y&R, and he hasn’t yet addressed his departure on social media. But we do know that Nate hasn’t been doing much on Y&R lately, other than popping on screen to be a doctor to various Genoa City residents here and there.

Perhaps the casting change signifies a new direction for the character. When Nate first appeared on canvas, he experienced friction with Hilary Curtis (Mishael Morgan), and the two sparred quite a bit before finally making peace before Hilary’s death.

Then it seemed like TPTB were going in the direction of pairing Nate with Victoria Newman (Amelia Heinle). Nate became Victor Newman’s (Eric Braeden) and Nikki Newman’s (Melody Thomas Scott) personal physician, and Nate subsequently noticed Victoria’s heightened stress level. Nate and Victoria initially disliked each other, and Nate was insistent on finding out why Victoria was so stressed out.

But the Nate-Victoria pairing never went anywhere, and Nate was then mostly relegated to the back burner, coming to the forefront only when someone was having a medical crisis. It would be nice to see the character of Nate utilized more and given more meaty material to work with. Hopefully, the influx of Sean Dominic to the role will bring more on-screen action for the character of Nate.

So, who is Sean Dominic? Well, he has appeared in several TV series, including Greenleaf, Makeup X Breakup, and Situationships. He will also be appearing in the upcoming series called Code 13: Unreadable, as Detective Jason Martins. Sean is new to daytime TV, so this will be his first soap role.

It will definitely be interesting to see a new take on Nate Hastings. Are you excited to see Sean Dominic’s version of Nate? Stay tuned to the CBS soap and don’t forget to check CDL often for the latest Young and the Restless spoilers, updates, and news.