The Young and the Restless Spoilers: Cait Fairbanks Off Contract as Tessa – Another Y&R Casting Shakeup 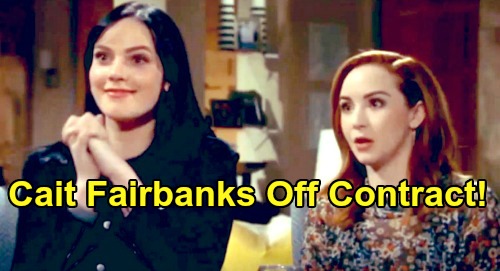 The Young and the Restless (Y&R) spoilers reveal that there’s another casting shakeup to pass along. Loren Lott (Ana Hamilton) recently confirmed that she’d been let go, which led fans to worry what other changes might be brewing. One’s just been confirmed through the closing credits, which indicate Cait Fairbanks (Tessa Porter) has dropped from a contract role to recurring.

This is unfortunate news for “Teriah” fans since it seemingly zaps their changes of a juicy storyline. However, it’s better than cutting Tessa completely. As of right now, it doesn’t look like Fairbanks is being written out. Based on Instagram stories and other social media content, Fairbanks appears to have been filming scenes each week for the last three weeks.

In other words, Tessa will still be around, but Y&R likely just wanted to save the money since they weren’t giving Fairbanks much airtime anyway. Of course, it would be better to stop ignoring the talented younger cast members. Kyle Abbott (Michael Mealor) and Lola Rosales (Sasha Calle) are still featured regularly, but others in that age bracket have been neglected lately.

There are plenty of great stories that could be written for Mariah and Tessa, but the show seems more interested in making them the token same-sex couple instead. Tessa has made her fair share of mistakes and some viewers still haven’t forgiven her, but there’s really no need to keep holding a grudge. Y&R’s redemption of Tessa is crystal clear through what’s been onscreen the last few months.

It was frustrating when The Young and the Restless kicked off an exciting stalker story for Mariah, which Tessa was quite involved in. That could’ve been a fun mystery that actually went somewhere, but it abruptly ended when Jared revealed himself to Mariah and simply confessed. Tessa told “brick boy” to get lost and that was that. It’s a shame when storylines with real potential just fizzle.

On the bright side, The Young and the Restless spoilers say there’s more music coming from Tessa and she’ll at least remain part of the canvas for the time being. What do you think about all the changes happening at Y&R? We’ll give you updates as other Y&R details emerge. Stay tuned to the CBS soap and don’t forget to check CDL often for the latest Young and the Restless spoilers, updates and news.