The Young and the Restless Spoilers: Cane Is Dark Billy’s Next Target – Will Cane Leave Genoa City Dead or Alive? 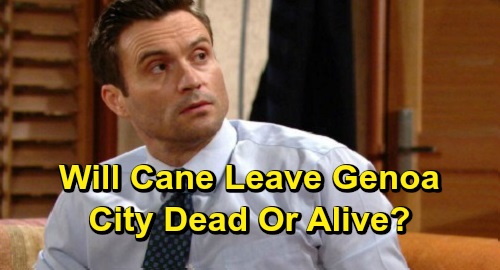 The Young and the Restless (Y&R) spoilers tease that Cane Ashby (Daniel Goddard) is set to exit the CBS soap, so it’s time to start thinking about how he’ll depart. Cane’s currently caught up in Katherine Chancellor’s (Jeanne Cooper) will chaos, which will bring a new mission soon. He’ll have to clear his own name after facing some startling accusations.

Since Cane genuinely seemed to think he was meeting Chance Chancellor (Donny Boaz) before he got knocked out cold, it looks like he’s innocent in all this. Cane was caught off guard based on what fans saw. The fact that he had to be unconscious before he picked up the pages proves he was in the dark.

Of course, Cane and the others really should’ve applied some logic here. There’s no way Katherine would’ve left Cane the bulk of her fortune – especially without including Lily Ashby (Christel Khalil) or the twins. This storyline makes all parties involves look a bit dimwitted, even with the alleged “proof” that the new pages are real. Devon Hamilton (Bryton James) should’ve kept digging and hired more experts.

Luckily, the will drama will be put to rest before long. Cane will likely accomplish his goal of clearing himself, but that won’t be the end of his nightmare. Y&R fans know Billy Abbott’s (Jason Thompson) therapist offered a grim warning. She insisted that even the smallest thing could trigger Billy’s sinister side – and it’s indeed been triggered through Cane and the con Billy thinks he’s pulling.

From November 7 onward, The Young and the Restless spoilers say Billy will keep obsessing about Cane and the scam. Since dark Billy previously tried to run down Adam, could he go after Cane next? That’s definitely a scary possibility to consider – particularly since we know Cane’s leaving! Billy failed to kill Adam, but Cane may not be as lucky. Even if he doesn’t die, Cane could end up in a long-term coma.