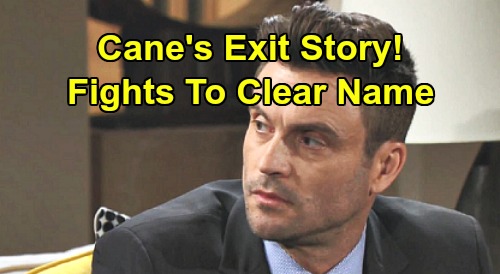 The Young and the Restless spoilers tease that Jill Abbott (Jess Walton) will hope for some answers. Once Devon Hamilton (Bryton James) agreed to give up the bulk of Katherine Chancellor’s (Jeanne Cooper) fortune, Cane Ashby (Daniel Goddard) was incredibly grateful.

Like pretty much every Y&R fan, Cane has no idea why Katherine would leave him all that money. Nevertheless, he assured Devon he’d do his best to honor Katherine’s legacy.

Of course, Jill began to suspect Colin Atkinson (Tristan Rogers) soon after Devon made his decision. The Young and the Restless spoilers say Jill will try to track Colin down and get some answers. There’s a good chance that’ll be a tough task. They’ve had a hard enough time trying to find Chance Chancellor and now they’re adding a Colin hunt to the mix!

Amanda Sinclair Won’t Be Able To Stay Silent Any Longer

During the week of November 11-15, Amanda Sinclair (Mishael Morgan) will be backed into a corner. Faced with the new information that’s surfaced, Amanda just won’t be able to stay silent any longer. She’ll be forced to make a confession – perhaps one that leaves Devon questioning Cane’s involvement.

Devon has made it crystal clear that he doesn’t trust Cane, and who could blame him? Cane hurt Lily Winters (Christel Khalil) deeply on more than one occasion, so Devon shouldn’t have to overlook that. However, Cane seems genuinely in the dark on whatever Colin might’ve cooked up.

It’s not like Cane would summon himself to a shady location to get knocked out cold. That was a surprise that caught him completely off guard. Cane’s been taken for a ride along with the rest of this gullible crew.

Even so, it’s understandable that Devon would be suspicious. After all, Cane’s the one with billions to gain from this plot! The Young and the Restless spoilers say Devon will hurl some harsh accusations as this mystery unravels. It sounds like he’ll accuse Cane of being in on it with Colin, but Cane will insist that’s just not true.

Y&R fans can expect Cane to take drastic action in the weeks ahead. His November sweeps will be spent trying to clear his name. Cane will fight to make Devon believe in his innocence, which should set up Daniel Goddard’s looming exit.