The Young and the Restless Spoilers: Chance Chancellor Mystery – Will He Return To Disrupt Adam’s Custody Plans?

BY hellodrdavis on August 11, 2019 | Comments: one comment
Related : Soap Opera, Spoiler, Television, The Young and the Restless 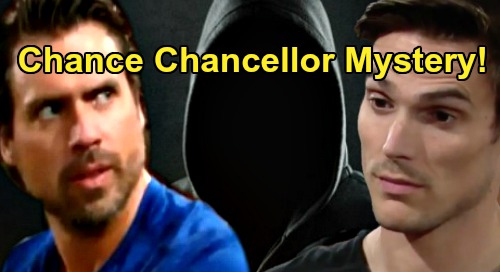 The Young and the Restless spoilers tease that Adam Newman (Mark Grossman) is back in full swing and causing havoc for his family. As Y&R viewers know, he’s already messed with Christian Newman (Alex Wilson), telling the confused little boy that he’s his father. And now it looks like Adam is going to try to rip Connor Newman (Judah Mackey) away from Chelsea Lawson (Melissa Claire Egan). It seems that there’s no stopping Adam.

Well, according to Y&R spoilers, Victor Newman (Eric Braeden) will soon step in and try to throw a wrench in Adam’s plan to wrestle custody of Christian away from Nick Newman (Joshua Morrow). Victor will arrange for a restraining order to keep Adam away from the boy, but that will only be a temporary fix to a larger problem.

Previously, Nick had Rey Rosales (Jordi Vilasuso) looking into Adam’s background and snooping around into his time in Las Vegas. Rey seemed to be on the verge of learning something about Adam that Nick might be able to use in Christian’s custody fight, and one thing in particular that Rey was investigating was Adam’s relationship and business dealings with Chance Chancellor (John Driscoll).

In fact, for a while there, Chance was all the talk on Y&R. He seemed to be the key to exposing something damaging from Adam’s Las Vegas past. But then, it seems that the storyline was suddenly dropped. Rey abruptly quit working for Nick because he couldn’t handle the impact of Adam in his life, which was odd in and of itself, but then Nick seemed to drop the whole investigation into Adam’s past.

So, we have to ask…Is Y&R ever going to pick the Chance angle back up? Surely, Nick still wants ammunition against Adam for the upcoming custody battle over Christian. After all, the judge is poised to revisit Christian’s custody in a few weeks, and Nick should be busy preparing. Plus, now that it looks like Adam may go after custody of Connor, one would think that Nick would redouble his efforts to investigate Adam’s past.

It seems like it would be a good time for some big, explosive truths to come out about Adam’s past – something that would give Nick and Chelsea some ammunition to use in their respective custody disputes. And there really doesn’t seem to be anything going against Adam right now, so can we expect to see something big come to light about Chance’s dealings with Adam in Las Vegas?

And might Chance eventually come back to Y&R? Time will tell, but it seems like there are quite a few loose ends on this story that need to be dealt with, so as not to leave viewers hanging and wondering what’s lurking in Adam’s past that we’re not yet privy to.

Have you been wondering about what’s going on with the Chance story? And do you think we’ll ever see Chance come back to Y&R? Stay tuned to the CBS soap and don’t forget to check CDL often for the latest Young and the Restless spoilers, updates, and news.