BY Heather Hughes on November 9, 2019 | Comments: one comment
Related : Soap Opera, Spoiler, Television, The Young and the Restless 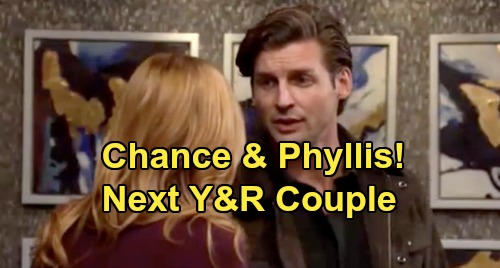 The Young and the Restless (Y&R) spoilers tease that Phillip “Chance” Chancellor IV (Donny Boaz) will make himself at home in Genoa City again. Since Boaz signed a multi-year deal with Y&R, they obviously have big plans for this character reboot. Chance has been mentioned for months, but the show took their sweet time about recasting him! It certainly seems like they put a lot of thought into their decision.

Of course, a hunk like Chance won’t stay single in GC for long. Who will Chance be paired up with as he settles back into town? There are some interesting options to consider. Chloe Mitchell (Elizabeth Hendrickson) was engaged to Chance once upon a time, but she seems content with Kevin Fisher (Greg Rikaart) now. They’ve got a beautiful family with Bella Fisher (Martie Blair), so Y&R may not want to derail that – at least not yet.

There’s always a possibility Chance and Chloe will get back together down the road, but there are other ladies in Genoa City that could use some love! Phyllis Summers (Michelle Stafford) has been single for quite some time. Although Y&R recently seemed to be hinting at a Phyllis and Nick Newman (Joshua Morrow) reunion, it’s definitely not a done deal.

In fact, some Y&R buzz out there suggests Chance will indeed be paired with Phyllis. There’s no confirmation on that yet, but it makes sense if they want to play the “Chick” and “Chadam” love triangle for a while. Chelsea Newman (Melissa Claire Egan) is currently with Nick, but her feelings for Adam Newman (Mark Grossman) should grow stronger in the weeks ahead.

Sharon Newman (Sharon Case) is often the welcome wagon when someone handsome shows up in town, but she’s back with Rey Rosales (Jordi Vilasuso). The Young and the Restless will surely want to let that ride for a bit. Otherwise, why bother putting them back together at all? “Shey” should be solid for the time being.

Phyllis is the reasonable choice here, especially since she’s been incredibly curious about Chance. That was initially more about Chance’s connection to Adam, but it could be the perfect setup for them to become a couple. The Young and the Restless spoilers say some great stuff’s coming up, so stay tuned. We’ll give you updates as other Y&R news emerges. Stick with the CBS soap and don’t forget to check CDL often for the latest Young and the Restless spoilers, updates and news.