The Young and the Restless Spoilers: Chelsea Is Adam’s Secret Accomplice – Reunited Lovers Take Down the Newman Clan?

BY Heather Hughes on May 14, 2019 | Comments: 3 comments
Related : Soap Opera, Spoiler, Television, The Young and the Restless 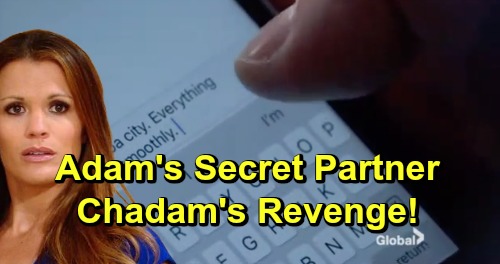 The Young and the Restless (Y&R) spoilers tease that Adam Newman’s (Mark Grossman) comeback will lead to some surprises. His family’s already been on edge over the grenade that’s been throw in Genoa City. Adam is a wild card, so it’s always tough to predict his next move. Right now, the Newmans are left to guess whether Adam has come back as a friend or foe.

Adam’s loved ones naturally plan to keep their guard up. Will that guard be lowered in time? Adam could easily win the trust of the Newman clan if he proves himself. However, putting faith in Adam could be a huge mistake. He’s clearly up to something since he’s got a major stash of cash and texts a secret partner on Tuesday, May 14

Adam lets this person know he’s in Genoa City and adds that everything is going smoothly. What clues can we gather from that? For starters, it suggests this partner in crime is currently outside of GC. There’s a chance this person could be in Genoa City as well, but Adam probably would’ve phrased it differently. He could’ve said “I’m in town” or even suggested meeting up in person.

Instead, Adam’s partner is probably somewhere far away from the drama. That brings us to the next part of the text – the “everything is going smoothly” part. This clue tells us that Adam is indeed running a scam of some sort. Whether he truly remembers his past or not, he may be hoping to take the Newmans for a ride.

It’s possible Adam’s working with Riza Thompson (Tina Casciani), the woman who’s been helping him out in Las Vegas. After all, they’re used to taking gambles and making sure no one’s tipped off to any tells or manipulation at the poker table. Of course, that’d be a pretty lackluster big reveal. Y&R will have to do better than that if they want to give fans a shock and keep us entertained.

Who would be a better option here? Which character would fit as an accomplice and could make a difference in this Young and the Restless storyline? Chelsea Newman (Melissa Claire Egan) might be a good choice. She reverted to her con artist ways before she left town. Chelsea also wasn’t on great terms with Victor Newman (Eric Braeden) when they parted ways, so this could be a joint revenge effort.

The Young and the Restless spoilers say Chelsea is poised for an early summer return. The timing certainly fits for her to be involved somehow, so it’d be intriguing if Chelsea’s got a secret plot cooking with Adam. Did they reunite offscreen and put this in motion?