BY Heather Hughes on November 11, 2019 | Comments: one comment
Related : Soap Opera, Spoiler, Television, The Young and the Restless 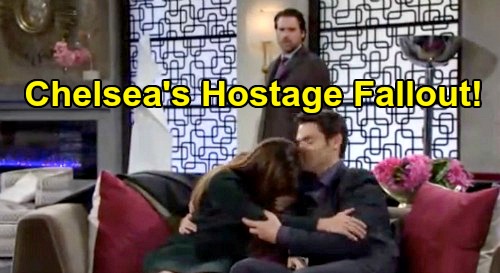 The Young and the Restless spoilers tease that Chelsea Lawson (Melissa Claire Egan) will have a lot of explaining to do. As Y&R viewers know, she’s gotten herself into quite a situation that has just come to a head in the lobby of The Grand Phoenix. She’s had Simon Black (Jeffrey Vincent Parise) breathing down her neck for days now, and he’s reached the limits to his patience. He wants the money that Calvin Boudreau (John Burke) owed him, and he wants it now.

Of course, Simon’s now in a bind since he knows that Federal agents – including Chance Chancellor (Donny Boaz) – are in hot pursuit. That’s what prompted him to take hostages and lock himself, Chelsea, Adam Newman (Mark Grossman), Abby Newman (Melissa Ordway), and Connor Newman (Judah Mackey) in the hotel lobby. Now there will be a major standoff, and it doesn’t look like Simon will make it out a free man.

There will certainly be plenty of drama unfolding as the standoff continues, but there is sure to be plenty of fallout from the situation after the fact for Chelsea. After all, Simon came after her for money that she received from Calvin’s estate that turned out to be dirty. And instead of asking for help with the situation, she chose to enlist Kevin Fisher (Greg Rikaart) to try to launder the money, which turned out to be a bust, since the Feds ultimately seized the money.

One wonders what Adam will have to say about this whole situation when the hostage standoff is over. He knew that something was bothering Chelsea, and he may be upset that she felt that she couldn’t go to him for help with the situation. He might also decide to use the information as ammunition against Chelsea later – after all, Chelsea’s actions put Connor directly in danger and she didn’t share that with Adam.

In the event that Adam ever decides to pursue full custody of Connor, it seems that he could certainly use Chelsea’s actions against her. He could argue that she endangered Connor and rather than go to the cops, she allowed the situation to continue. It could be a real mess for Chelsea.

Chelsea’s actions may also have serious consequences for Nick Newman (Joshua Morrow). As Y&R viewers know, Nick has just launched a political campaign, as he’s running for city council. His personal associations are currently under a lot of scrutiny by the media and no doubt by his opponents as well. When news about Chelsea’s money laundering and Calvin’s shady business dealings come to light, it will probably have a detrimental effect on Nicks campaign.

Indeed, Y&R spoilers indicate that Nick’s campaign will soon blow up, and there’s probably a very good chance that the hostage situation at The Grand Phoenix will result in a larger investigation that will make Chelsea’s money laundering and evasive actions public knowledge. We can’t forget that Nick has a big debate coming up, and the middle of such an event would be a very bad time for Nick to hear about the hostage stand-off and/or Chelsea’s involvement with someone like Simon.

At any rate, it looks like Chelsea and the men closest to her will be looking at some serious consequences resulting from her choices. But will it destroy her relationship with one of them, or both of them? What do you think? Will Chelsea’s relationships with Nick and Adam survive this ordeal? Stay tuned to the CBS soap and don’t forget to check CDL often for the latest Young and the Restless spoilers, updates, and news.