BY Olivia Marie on May 12, 2019 | Comments: one comment
Related : Soap Opera, Spoiler, Television, The Young and the Restless 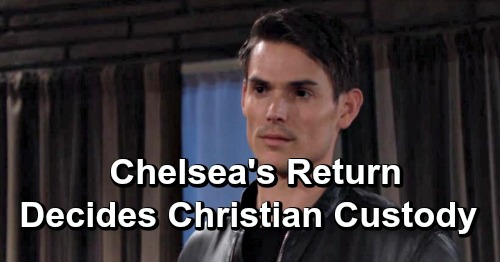 The Young and the Restless (Y&R) spoilers tease that Adam Newman (Mark Grossman) and Nick Newman (Joshua Morrow) will go head-to-head over Christian Newman (Tobias twins). While Adam is suffering from memory loss right now, the spoilers suggest that it won’t be long until his memories return and he wants to fight for his son.

When Nick found out that Adam was alive, his first thought was Christian. He was concerned that Adam would come back to claim the son he raised as his own. In fact, Nick thought that Christian was his son until Chelsea Newman (Melissa Claire Egan) left town. She wrote him a goodbye letter and revealed the shocking news.

Longtime Y&R fans remember that Adam never wanted to raise Christian before. He was happy to let Nick and Sage Warner (Kelly Sullivan) raise the child as their kid. He knew he would see him grow up as Nick is his half-brother.

One of the storylines coming up is Nick and Adam will battle over Christian. They both feel like they are the better father to raise him. Y&R spoilers suggest that Nick would have the leg up on this fight as he has been raising Christian since he was a tot. However, one cannot count Adam out either as he is his biological father.

The second part of the Y&R spoiler is both men will want to get Victor Newman’s (Eric Braeden) approval. And, Nick will fall short of that.

Over the past decade, Victor has always favored Adam over Nick. While Nick and Victor have had fleeting moments of peace, generally speaking, they are constantly at odds with each other. However, with Adam, Victor seems to understand him and approve of most of his life choices.

One thing is for sure, Chelsea’s arrival will throw both men for a loop. Y&R spoilers state that Nick thought he had gotten over Chelsea, but when he sees her, he will be rocked. Not surprising, Adam will still be in love with Chelsea too. It looks like Nick and Adam will not only fight for their dad’s love and attention but Chelsea’s too.

It looks like it might get a little messy in the Newman family soon. Don’t forget to come back to CDL later for more The Young and the Restless (Y&R) spoilers, news, and casting updates!