BY Sean O'Brien on May 19, 2019 | Comments: one comment
Related : Soap Opera, Spoiler, Television, The Young and the Restless 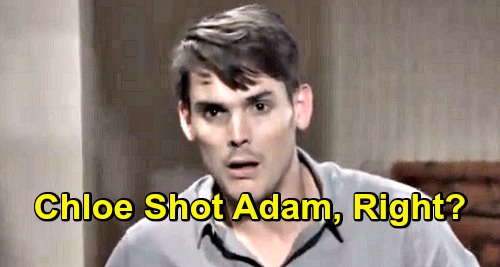 The Young and the Restless spoilers documented all of Chloe Mitchell’s (Elizabeth Hendrickson) efforts against her mortal enemy, Adam Newman (as now played by Mark Grossman). That’s what seems to make her the easy answer in Y&R unfolding shooting mystery.

It was Chloe! Hardcore fans surely are aware of that buzz conclusion. But would Y&R write in that easy direction, or provide a deeper answer eventually?

Considering that Hendrickson isn’t yet known to officially be returning to the cast, it’s fair to use that bit of knowledge to assert that Chloe didn’t do it because she’s not being written back into the show. However, the actor did recently take to social media, implying that more of Chloe and Kevin Fisher’s (Greg Rikaart) love story was yet to be told.

This was backed up by comments in SOD from a Y&R insider. So that could mean that Hendrickson knows something, or is at least trying to encourage a reboot of her character.

Assume that Chloe does, or doesn’t return, but isn’t the shooter. Well then who is?

Riza Thomas (Tina Casciani) was the memorable lady that Victor Newman (Eric Braeden) spoke with in Las Vegas, Nevada. She didn’t appear to be Adam’s latest love interest, but seemed to be his gambling director.

Spider, as he called himself on the high stakes poker circuit, claims to have awoken on a freight train an unknown amount of time after Chloe failed to blow him up in the cabin, circa September 2016. He jumped off somewhere near the city of mega money, or arrived there somehow.

The sketchy details Adam provided about where he’s been during the past two-plus years, combined with his amnesia, if he actually has been suffering from this condition, leave all Genoa City residents and its viewers unsure of the full truth. But the amount of money he’s been winning, or losing, can’t be targeted as a reason why someone would want to shoot him.

Did Adam steal the bundled cash that was seen in the bag he stored in the tack house, or was there something else of value mixed in with all those bills?

As Y&R seems to reveal, the money wasn’t touched by whoever plugged Adam. So maybe something else of value was taken? If so, a recovery agent, sent by an unknown party, would merely be the middle man, or woman.

Adam and Chloe do share something in common, people often want to blame them when something dramatically bad happens. Yes, each person has a crummy track record. But maybe in this instance, Chloe isn’t the top suspect that she seems to be.

Do you think Chloe shot Adam – or was it someone else? CDL is a leading source for everything linked to The Young and the Restless. Check back regularly for Y&R spoilers and news!