BY Marcy Cohen on June 9, 2019 | Comments: one comment
Related : Soap Opera, Spoiler, Television, The Young and the Restless 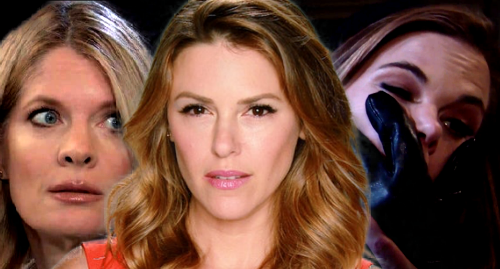 The Young and the Restless (Y&R) spoilers tease that Phyllis Summers (Gina Tognoni-Michelle Stafford) will remain stuck in a horrible situation. Some might say she had it coming after all her betrayals and outbursts, but Kevin Fisher’s (Greg Rikaart) move was still awfully extreme. The worst part is Kevin kidnapped Phyllis based on a false assumption.

On June 10, Kevin will reveal to Adam that he’s got his new girlfriend. He’ll explain that he’s been in town long enough to see who Adam spends his time with, so he swiped Phyllis in hopes of making a trade. That’s because Chloe Mitchell (Elizabeth Hendrickson) disappeared and Kevin holds Adam responsible. He’ll suggest that swapping one hostage for another is the fair way to resolve this.

Of course, Adam isn’t romantically interested in Phyllis and doesn’t really care about her fate. He’ll deny kidnapping Chloe, who recently shot him, but he’ll call someone later about a change of plans and blame it on Kevin being an idiot.

Perhaps Adam really did have Chloe kidnapped. He may opt to release her and clear this up before Nick Newman (Joshua Morrow) fights back over Summer Newman’s (Hunter King) mom.

Regardless, Chloe will end up a free woman soon. The Young and the Restless spoilers say Phyllis will be stunned when she gets a visit from the presumed dead attempted murderer. She’ll come face to face with Chloe and wonder what in the world’s going on.

Now here’s where things get tricky. This is set to air in the next week or so, and Michelle Stafford isn’t supposed to make her onscreen comeback that fast. You can bet that Y&R will make a huge deal out of Stafford’s return. It’ll inevitably involve some hot promos, interviews, etc. They’re not going to just slip some little scene in under the radar.

However, Gina Tognoni’s final episode has already aired, so how will The Young and the Restless handle this? There’s an easy way to do it, and that’s simply just show the scene from Phyllis’ perspective. We may see the camera pan up to Chloe, who could greet Phyllis by name to tell us what’s happening here.

Since Phyllis will be offscreen for a bit, maybe Chloe will make her an offer she can’t refuse. Phyllis is a cutthroat businesswoman at heart. Despite her anger over Kevin’s actions, she wouldn’t pass up a good deal that might benefit her.

Will Chloe and Phyllis wind up working together on a plot – and could this plot be to destroy Adam Newman? Then again, Chloe might free Phyllis and let her head off to do some plotting of her own!