BY Heather Hughes on November 23, 2019 | Comments: one comment
Related : Soap Opera, Spoiler, Television, The Young and the Restless 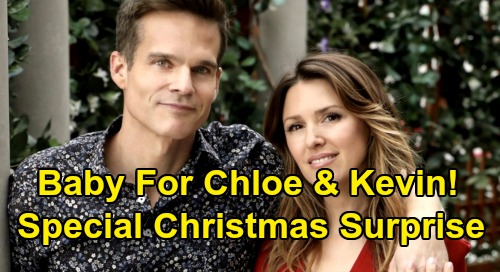 The Young and the Restless (Y&R) spoilers tease that Thanksgiving is almost here, which means Christmas is just around the corner. It’s all about thinking ahead when it comes to spoilers! With that in mind, we should talk about a special gift that’s coming up for one lucky Genoa City resident.

Y&R fans know Christmas came early for Chloe Mitchell (Elizabeth Hendrickson) and Kevin Fisher (Greg Rikaart) this year. Michael Baldwin (Christian LeBlanc) gave them the best gift they ever could’ve imagined. Thanks to Michael, Chloe’s free to live her life in Genoa City. She doesn’t have to live in hiding anymore, and Kevin doesn’t have to harbor a fugitive.

Chloe also got her friendship with Chelsea Lawson (Melissa Claire Egan) back on track and has a new job at the Grand Phoenix. There was that little hiccup with Chelsea’s money laundering, but that only came back to bite Chelsea. Chloe and Kevin are happily raising Bella Fisher (Martie Blair), so life seemingly is pretty perfect for this family.

It turns out things could get even better! The Young and the Restless spoilers say Chloe will have a big surprise for Kevin this Christmas. She’ll give him the ultimate present this year – and it should be one he never saw coming. Could it involve a family addition? Will Chloe reveal that she’s pregnant with another baby?

Y&R viewers have probably heard that Elizabeth Hendrickson is pregnant in real life, so it makes sense for the show to write it in. After all, Kevin and Chloe are happily in love. They’re young and only have one child together, so why not give them another son or daughter to adore?

Chloe suffered a terrible loss when Delia Abbott (Sophie Pollono) died, but Bella gave her a sense of purpose and eventually helped her heal. She realized she had to let go of her desire for revenge on Adam Newman (Mark Grossman). It was consuming Chloe and keeping her from being the mom Bella needed.

Now that Chloe’s got her life in order, it’s the ideal opportunity to give her another kid with Kevin. It would certainly give Chloe and Kevin something to look forward to as they head into the new year. Will a baby be Chloe’s big surprise? Will that be the ultimate present Kevin receives this Christmas?