BY Sean O'Brien on April 30, 2019 | Comments: one comment
Related : Comings & Goings, Soap Opera, Spoiler, Television, The Young and the Restless 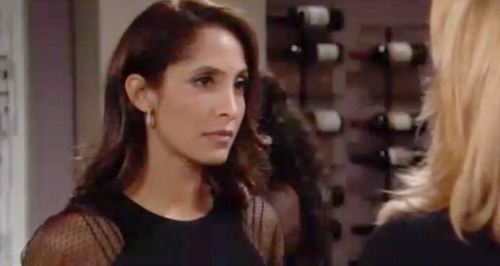 The Young and the Restless spoilers tease that Lily Ashby’s (Christel Khalil) decision to leave Genoa City is likely a temporary one. Khalil remains on a recurring contract with Y&R. So fans of this Daytime Emmy Award-winning actor can look forward to Lily’s further storylines.

A divorce between Lily and Cane Ashby (Daniel Goddard) is plausible. While Mr. Ashby doesn’t want to sign the papers, an interesting story within a story, being written by Traci Abbott (Beth Maitland), appears to signal that Cane will be walking on a fresh plot path.

As Y&R fans recall, Khalil voluntarily dropped from regular to recurring status last year. She did so after a long run on the show, with the intent of spending more time with her family.

The grind of working long stretches during many periods of a year on a daytime drama takes it toll on the actors and behind the scenes soap opera personnel. In Khalil’s instance, she debuted as the SORAS’d version of Neil Winters (Kristoff St. John) and Drucilla Winters (Victoria Rowell) daughter in 2002. While there were some brief breaks, Khalil was a regular part of the cast through last summer.

Writing Lily off to prison allowed Khalil to appear on the show in recurring fashion. Y&R addressed the storyline challenges for the Ashby family by having Cane go off-course in kissing Victoria Newman (Amelia Heinle) various times. Billy Abbott’s (Jason Thompson) rush to tell Lily what happened served to break reestablished trust between Lane and eventually cause Lily to decide that she and Cane needed to end their marriage.

The recent, unexpected passing of St. John saw Y&R write Khalil’s character to an early release from prison, due to good behavior. That allowed Lily to return to Genoa City, where she was soon told the stunning news by her brother, Devon Hamilton (Bryton James). Together, they grieved with Neil’s family members and friends.

Cane was hopeful that Lily would reconsider her decision to split. But apparently that’s not happening. So fans are being led to believe that Lane is actually over and that Lily’s presence in the show will shift toward the prison-related job she’s accepted.

A strong kudos to all who were involved in the special Neil-related episodes and in the St. John tribute show. Khalil’s efforts, in particular, were outstanding.

It surely wasn’t easy to recur in that manner as Lily, or to take part in honoring St. John along with all of the other actors. But that’s what someone who is a professional and most importantly, a good person does for a treasured colleague and friend.

After seeing Khalil’s powerhouse performances recently would you like to see Lily be involved in regular storylines? CDL is a leading source for everything linked to The Young and the Restless. Check back regularly for Y&R spoilers and news!