The Young and the Restless Spoilers: Comings and Goings – Ashley Back to Reveal Explosive Secret – Sneaky Kerry’s Exit Looms

BY Heather Hughes on March 24, 2019 | Comments: one comment
Related : Soap Opera, Spoiler, Television, The Young and the Restless 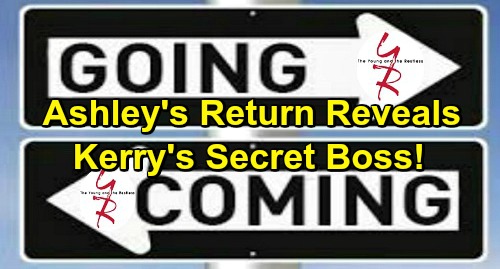 The Young and the Restless (Y&R) spoilers tease that we’ve got some comings and goings news to pass along. Some exciting returns are on the way, so let’s talk about them. For starters, Beth Maitland will reprise her role as Traci Abbott starting March 25. She’ll help Jack Abbott (Peter Bergman) deal with Dina Mergeron (Marla Adams), who’ll be upset and confused about Ashley Abbott’s (Eileen Davidson) whereabouts.

Of course, Y&R is bringing Traci back into the picture for the Abbott family drama that’s brewing. They’re also mentioning Ashley because she’s set to make a comeback of her own. The Young and the Restless spoilers say Eileen Davidson will return for a two-episode stint starting March 29. Ashley will deliver some stunning information to her family, so expect some shakeups at Jabot.

It’s possible Ashley will be the same cutthroat businesswoman she was when she left town. In that case, Ashley might’ve sent Kerry Johnson (Alice Hunter) to do her dirty work. She could reveal that they’ve been scheming together. Then again, Ashley may have been a target as well. She could return to tip the Abbotts off to Kerry’s agenda.

However, that would still leave the mystery of Kerry’s secret boss. Victor Newman (Eric Braeden) may have been too wrapped up in trial chaos to care. Besides, he probably wouldn’t target Ashley as part of Jack and Phyllis Summers’ (Gina Tognoni) takedown. Why risk angering Abby Newman (Melissa Ordway) like that? Victor’s probably glad Ashley took her patents and left Jabot reeling anyway.

If Ashley plays the hero, that means she’ll have to be a victim, too. It’s hard to think of someone who would target Phyllis, Jack AND Ashley. With all that in mind, this may indeed be a ruthless business move by Ash herself.

Regardless, it’s clear that Kerry’s time on The Young and the Restless is winding down. Once Kerry’s secret is exposed, she’ll have to leave town. It won’t be much longer until Y&R fans are saying goodbye to Kerry and her manipulation.

Other Young and the Restless spoilers say Paul Williams (Doug Davidson) will appear onscreen starting March 26. Instead of offering an explanation for his absence, Y&R will just pretend Paul’s been there all along. He’ll jump right back in by firing Rey Rosales (Jordi Vilasuso) and helping Christine Williams (Lauralee Bell) figure out what to do with the cover-up crew.

It sounds like some great scenes are ahead thanks to all the comebacks. We’ll give you updates as other Y&R details emerge. Stay tuned to the CBS soap and don’t forget to check CDL often for the latest Young and the Restless spoilers, updates, and news.