The Young and the Restless Spoilers: Comings and Goings – Big Comebacks and Debuts Shake Things Up, Hot Y&R Drama Ahead

BY Heather Hughes on August 10, 2019 | Comments: one comment
Related : Soap Opera, Spoiler, Television, The Young and the Restless 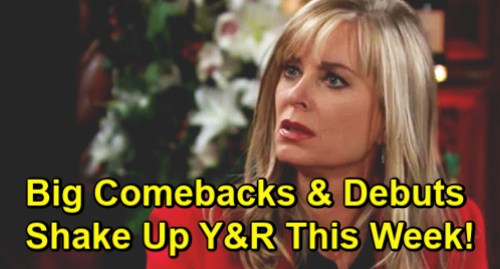 The Young and the Restless (Y&R) spoilers reveal that there’s some comings and goings news to pass along. In fact, there’s a whole lot of it! Y&R fans will see several familiar faces as well as some brand-new ones over the next few weeks. We’ve got some casting updates, so let’s dive in and make sure you know what to expect.

For starters, Daryl Tulane (Gordon Thomson) will pop up again with another bombshell for Chelsea Newman (Melissa Claire Egan). He’ll conclude his stint with this shocker on August 13 and leave Chelsea to deal with the aftermath. Y&R fans can expect Chelsea to be thrown for quite a loop!

Other Young and the Restless spoilers say Ashley Abbott (Eileen Davidson) will return to town for a celebration. She’s merging her company with Jabot, so Abby Newman (Melissa Ordway) will be thrilled over Ashley and Jack Abbott’s (Peter Bergman) joint vision.

Will Ashley Abbott Move Back To Genoa City Permanently?

She’ll wonder if this means Ashley might move back to Genoa City, but there’s no word on if that’s what Ash has in mind. Ashley might still plan to just fly in from Paris when necessary. However, the fact that Jabot and My Beauty are coming together is a good sign.

It sounds like Y&R will find more ways to include Ashley in the months ahead. That’s great to hear, especially since the Newmans have been hogging the drama a bit lately. Perhaps we’re gearing up for a little more Abbott action soon.

Of course, one Abbott’s already gearing up for some action: Kyle Abbott (Michael Mealor). He’s about to wed Lola Rosales (Sasha Calle), which means a priest named Father Francis (Mark Berry) will be on hand.

However, Zoe Hardisty’s (Anna Grace Barlow) arrival on August 15 could shake things up a bit. It looks like Kyle will indeed marry Lola, but his past will come back to haunt him later.

The Young and the Restless spoilers say the end of the month will bring another appearance from Judge Sanders (Joseph C. Phillips). Lauren Woodland will also reprise her role as Brittany Hodges on August 27. Perhaps Nick Newman (Joshua Morrow) will be more prepared for battle this time with Brittany in his corner.

That’s it for comings and goings! We’ll keep you posted as other Y&R details emerge. Stay tuned to the CBS soap and don’t forget to check CDL often for the latest Young and the Restless spoilers, updates and news.