The Young and the Restless Spoilers: Countdown to Kyle and Lola’s Marriage Destruction – Jabot War with Theo Ends in Disaster? 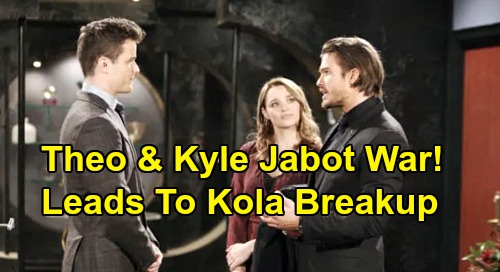 The Young and the Restless (Y&R) spoilers tease that Kyle Abbott (Michael Mealor) may not be able to keep his word. Kyle had finally decided to give Theo Vanderway (Tyler Johnson) another chance, but that was before he knew Theo would be joining the team at Jabot. Thanks to Jack Abbott (Peter Bergman) and his desire to bring the family together, Kyle’s patience will be tested.

The truth is Theo seems to be making a genuine effort to turn things around. Learning about his ties to Dina Mergeron (Marla Adams) and the Abbott family emotionally affected him. That doesn’t erase what Theo did in the past, and this has certainly been a flimsy push for redemption. Y&R expected fans to get over Theo’s previous actions too fast, but the point is we’re probably supposed to think Theo’s one of the good guys now.

So what happens once Theo rolls up his sleeves and gets to work at Jabot? The Young and the Restless has consistently portrayed Theo as someone who’s ambitious and really knows his stuff. He’ll surely do well as the head of Jabot’s social media department. However, Kyle’s negative view of Theo could influence his view of Theo’s suggestions. He may wind up judging Theo too harshly and nixing his ideas out of spite.

As co-COO of Jabot, Kyle will be above Theo and will have some say in approval of his plans. Jack will be able to make the final call on decisions, but there’s definitely the potential for a Kyle power trip. Basically, The Young and the Restless may shift from Billy Abbott’s (Jason Thompson) unfair treatment of Kyle to Kyle’s unfair treatment of Theo.

Summer Newman (Hunter King) admitted she thought it was OK for Kyle to still be wary of Theo. She doesn’t judge Kyle since she understands things have been complicated between them. It’s easy to imagine Summer siding with Kyle once work conflict inevitably heats up. That could rile Theo and set the stage for romantic disaster.

Summer and Theo have always had a weak relationship anyway. There’s no real commitment going on. Summer was rather blasé about Theo’s decision to leave for Paris, so they’re probably set to fizzle or flame out soon. That could pave the way for the real battle here, which is who ends up with Lola Abbott (Sasha Calle).

Theo has mentioned that he wishes he’d met Lola first. He’s clearly developed feelings for Lola, so pushing him too far could be dangerous. Although Theo seems to be on a better path, there’s always a chance he’ll revert to his old ways. There’s a good possibility he’ll land in bed with Lola at some point.

Will Kyle set that in motion by trying to sabotage Theo at Jabot? Will Kyle’s treatment of Theo mean the destruction of his marriage? The Young and the Restless spoilers say some excitement’s looming in Genoa City. We’ll give you updates as other Y&R news comes in. Stay tuned to the CBS soap and don’t forget to check CDL often for the latest Young and the Restless spoilers, updates and news.