The Young and the Restless Spoilers: Danger Hits for Summer, Victor Steps Up – Theo’s No Match for The Moustache 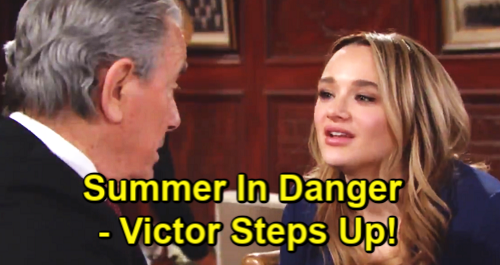 The Young and the Restless (Y&R) spoilers tease that Summer Newman (Hunter King) will find herself in a tight spot. This tight spot will actually turn out to be pretty risky, so Victor Newman (Eric Braeden) will want to watch out for his granddaughter.

Family is important to Victor – at least when loyalty is involved. He has no use for Adam Newman (Mark Grossman), but he cares about the rest of the Newman clan more than ever right now.

Victor’s a busy guy, especially since Adam has vowed to take down the Newman empire and everyone who’s a part of it. Their war is heating up, but Victor won’t just leave Summer hanging. He recently overheard Phyllis Summers (Michelle Stafford) plotting against Abby Newman (Melissa Ordway) and warned her about the trouble. It’s clear that Victor’s keeping his eyes and ears open.

Victor Newman Will Realize Summer Newman Is In Danger

The Young and the Restless spoilers say Victor will make another shocking discovery soon enough. During the week of August 26-30, Victor will realize Summer is in danger. How dangerous are we talking here? Sometimes Y&R tends to exaggerate things like this and other times it’s real-deal peril. It’s possible Summer will be in a life-threatening situation or this could just involve her tender heart.

One option is for Summer to inadvertently get caught up in Billy Abbott’s (Jason Thompson) path to vengeance. Y&R spoilers say Victor will step up for Summer to protect her from a bad outcome, so he could save her life and get hurt instead. However, Victor’s already facing a serious illness. Does the show really need to put him in the middle of Adam and Billy’s battle? The Moustache’s life is already in jeopardy.

Summer also hasn’t been involved in Billy and Adam’s stories at all so far. We can’t rule anything out, but other possibilities seem more likely. At the moment, Summer is all about pining for Kyle Abbott (Michael Mealor) and making sure she hangs onto Theo Vanderway (Tyler Johnson). Perhaps that’s where Victor’s help will come in instead.

A Tie-In With Theo Vanderway And His Zoe Hardisty Connection?

Just like with Abby, Victor may learn information that makes him fear what’s next for Summer. This could tie in with Theo’s bad boy tendencies and connection to Zoe Hardisty (Anna Grace Barlow). Victor may feel like things are dangerous since Summer’s involved with Theo and could face backlash from whatever he’s plotting next.

Maybe Victor will put some fear in Summer’s sleazy love interest. It’s be satisfying to watch Victor corner Theo and remind him who’s really got the power in this town! Regardless, The Young and the Restless spoilers say The Moustache will be a bit of a rescue ranger in the week ahead.

It sounds like some great conflict is ahead in Genoa City. We’ll give you updates as other Y&R news comes in. Stay tuned to the CBS soap and don’t forget to check CDL often for the latest Young and the Restless spoilers, updates and news.