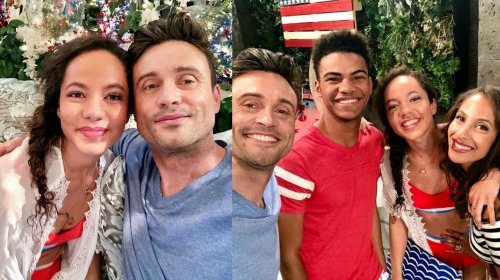 The Young and the Restless (Y&R) spoilers reveal that one CBS star has something to celebrate – and her proud TV dad is joining in the fun. Y&R fans know Daniel Goddard as Cane Ashby and Lexie Stevenson as Cane’s daughter, Mattie Ashby. Mattie may not be around anymore, but there’s always a chance she’ll come back to shake things up down the road.

In the meantime, Stevenson just passed a major milestone – her 21st birthday! That’s big one, so Goddard wanted to make sure he gave it the attention it deserves. On Twitter, Goddard sent a sweet birthday message to Stevenson. He may not be her real dad, but he’s clearly got a lot of love for his onscreen kiddo.

Goddard tweeted, “Today my kind, funny, smart, & totally crazy TV daughter turned 21! You are soooooo old now!” He used a heart emoji to insist he loves Stevenson “to Pluto & back (& yes Pluto is a planet! It was, is, & will always be & anyone who says it isn’t is wrong!) #yr #ashbys” Goddard included some great TV father-daughter pics as well as some of the whole Ashby family.

Of course, Goddard has been quite vocal about how much he misses the Ashbys. Since Christel Khalil isn’t interested in being on contract as Lily Ashby, that led to “Lane’s” split and a new path for Cane. He quickly fell for Traci Abbott (Beth Maitland) and was ready to begin a future with her, but she pumped the brakes and gently insisted they should just be friends.

Many Y&R fans were starting to get on board the “Trane” – or at least wanted to see what stations it might roll into. There were some interesting places The Young and the Restless could’ve gone with Cane’s new love story, but it was quashed before it ever really had a shot. We heard buzz about Goddard’s disapproval having something to do with that, but there was no confirmation either way.

Regardless, Goddard definitely loves the Cane and Lily pairing. He even included a hashtag with a broken heart emoji to go with his Ashby fam pics. It’s safe to say “Lane” supporters are still heartbroken, too. What’s next for Cane without Lily or Traci as his love interest? Will Y&R give him another one or focus on some other type of storyline?

Today my kind, caring, funny, smart, and totally crazy TV daughter turned 21yrs oooooollllllld! You are soooooo old now! 😂😂😂😂😂😂 Seriously you are so old! So celebrate tonight beautiful girl because it’s allllll downhill from here! 😂😂😂😂 Love you to the pluto and back (and yes Pluto is a planet! It was, is, and will always be… and anyone who says it isn’t is wrong!) 😇 #yr #ashbys #💔