BY Heather Hughes on February 20, 2019 | Comments: one comment
Related : Soap Opera, Spoiler, Television, The Young and the Restless 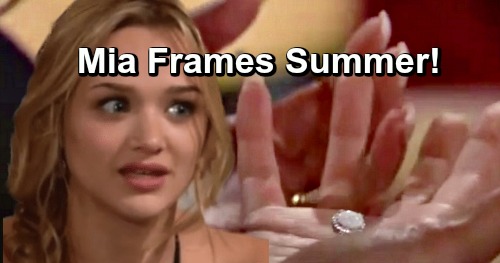 The Young and the Restless (Y&R) spoilers tease that Kyle Abbott (Michael Mealor) will remain angry with Summer Newman (Hunter King). He feels like Summer derailed his relationship with Lola Rosales (Sasha Calle) and put her in danger as a result. Lola ended up at the wrong place at the wrong time, so Kyle blames his ex. He even suggested Summer might’ve been behind the attack herself.

Summer denied the accusations, and we know she’s telling the truth. Mia Rosales (Noemi Gonzalez) was actually the one who shoved Lola, but she intended to attack Abby Newman (Melissa Ordway). Obviously, Mia never imagined Lola would be wearing Abby’s coat that night.

Of course, the intended victim doesn’t matter here. Mia put someone’s life in jeopardy – and not just any old someone! Rey Rosales (Jordi Vilasuso) and Arturo Rosales’ (Jason Canela) sister could’ve died thanks to Mia. As the pressure intensifies, Mia will undoubtedly be left scrambling. She’ll fear the earring left on the Abbott property will come back to haunt her.

What will Mia do once she’s officially backed into a corner? Will she commit another crime to save herself? There’s an easy fix for this earring situation. Perhaps Mia will decide to plant the remaining earring in another woman’s jewelry box. She’d love to take Abby down, but that wouldn’t be believable. Mia needs someone the police would buy as Lola’s attacker, which is where Summer could come in.

Phyllis Summers (Gina Tognoni) has become Mia’s confidant, so that’d be an easy excuse for Mia to enter the home. Y&R fans will recall that Summer moved in with Phyllis and Nick Newman (Joshua Morrow). Perhaps that was in preparation for this storyline. Even if Mia doesn’t go to all that trouble, she could at least plant the earring in Summer’s purse.

Then, Mia could stir up additional suspicions for Kyle and maybe even the cops. She’s married to Rey, so it’d be easy for her to influence his suspect list. Summer could end up framed and on the hot seat! The Young and the Restless spoilers say Abby could be in Summer’s orbit more often soon. Maybe she’ll be the one to prove Summer’s innocence and take Mia down.

You can bet Mia will do whatever she can to avoid getting caught. Will Summer pay the price as Mia grows increasingly desperate? The Young and the Restless spoilers say some shockers are looming, so we’ll give you updates as other Y&R news comes in. Stay tuned to the CBS soap and don’t forget to check CDL often for the latest Young and the Restless spoilers, updates, and news.