BY Sean O'Brien on May 6, 2019 | Comments: one comment
Related : Soap Opera, Spoiler, Television, The Young and the Restless 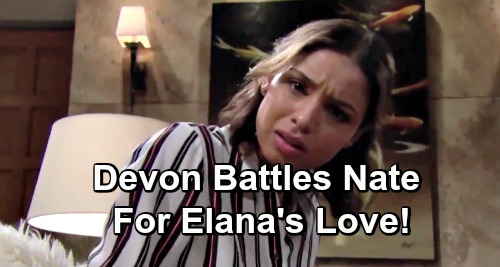 The Young and the Restless spoilers tease that Devon Hamilton’s (Bryton James) visions of Hilary Hamilton (Mishael Morgan) will continue. He won’t deal with the mind trick at first, but Elena Dawson (Brytni Sarpy) will eventually become a potential bridge to move forward.

It was a gift for viewers to see the Morgan back on screen again as Hilary. Fans know that the actor voluntarily departed the cast last year in order to spend more time with her young family.

Morgan returned to the set recently, where she took part in Y&R’s special behind the scenes tribute episode to Kristoff St. John (Neil Winters). She, along with other former actors, like Victoria Rowell (Drucilla Winters), and current cast members paid their respects to St. John by offering remembrances in what was a fitting, special event.

Y&R also wrote Morgan back into the fictional setting, where she recorded a handful of scenes in which Hilary appears to Devon. At first his mind replaces Elena’s laugh with Hilary’s at Society, the new restaurant that he and Abby Newman (Melissa Ordway) just opened. Further glimmers of Mrs. Hamilton are also coming.

Devon obviously repressed his grief since Hilary passed due to injuries which resulted from Lily Ashby (Christel Khalil) having accidentally run a red light. Hevon’s child, which would have been their first, died as well.

The combination of finding Neil at the penthouse, where Hevon lived, and Lily having just been released from jail, is proving to be a trigger. The emotional wounds within Devon’s mind reopened, as he transferred his love for Hilary to a potential new match in Elena.

Soaps are a fluid medium, where new actors replace favored, familiar faces. Such is true with Sarpy’s arrival. Elena’s familial link to Ana is serving as a natural entrance for Devon to get to know the impressive doctor and explore romance once more.

Considering Y&R’s recast of Nate Hastings (Sean Dominic) and that character’s profession, with him also being a doctor, it’s reasonable to believe that Elena may have at least two suitors. Fans know that Nate is living across the hall from Devon, Ana, and their house guests, Elena and her father Jett Slade (Gilbert Glenn Brown).

An easy guess would have Nate informing Elena about the need for staff at Genoa City Memorial Hospital. She also might assist with further surgery that Jett needs. If achieved, Dr. Dawson’s link to Dr. Hastings would put Devon in competition with his cousin for Elena’s heart. Yes, conflict persists as an evergreen concept in daytime drama.