The Young and the Restless Spoilers: Drug Bust Leads to Sharon and Rey’s Shocking Night Together – Motel Room Surprises in Store 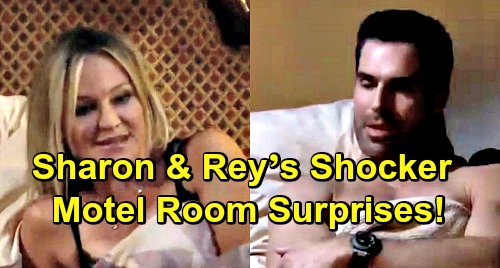 The Young and the Restless (Y&R) spoilers tease that Rey Rosales (Jordi Vilasuso) will need Sharon Newman’s (Sharon Case) help with a case. A drug bust will lead to some scary moments for a little boy within the home. Sharon will travel out of town with Rey to reassure the kid as they take him to his grandparents’ house. The mission will go well, but the drive back will not.

Rey will struggle to control the car on the icy roads, so he’ll eventually have to pull off somewhere. They won’t be making it back to Genoa City before morning. Instead, Sharon and Rey will find themselves at a crummy motel. Y&R spoilers say it’ll be the only place they can find nearby.

To make matters worse, this motel will only have one room available. Sharon and Rey may think that’s OK at first. It’s obviously not ideal, but they’ll at least expect two beds. Unfortunately, the person running the front desk will have more bad news. The room that’s available will just have a single bed, so that’ll lead to some awkward moments after check-in.

The Young and the Restless spoilers say Rey will quickly give the bed to Sharon. There’ll be a chair in the room, so Rey will spread some blankets out and make himself as comfortable as he can. Of course, there’ll be loads of sexual tension, especially once Rey’s shirtless and Sharon strips down to her tank top.

Neither one of them will be able to sleep, so Sharon will wonder if Rey’s got any ideas on how to pass the time. He’ll probably suggest that they could just talk. Rey always seems to enjoy chatting with Sharon. She enjoys it as well – as long as it’s not about J.T. Hellstrom (Thad Luckinbill)!

Fortunately, this will likely be a J.T.-free zone. Sharon may get a break from the cover-up crew drama and just free her mind to bond with Rey. Since Rey has recommitted to Mia Rosales (Noemi Gonzalez), this whole evening will be pretty problematic. Mia isn’t going to be happy when she hears Sharon and Rey spent the night together…sort of anyway.

However, Mia may not have much room to talk. She’ll begin reconnecting with Arturo Rosales (Jason Canela), so temptation will be coming from every angle. Will Mia betray Rey before he has the chance?