The Young and the Restless Spoilers: Elena And Devon Y&R’s New Super Couple – Will Hevon Fans Accept Them?

BY Olivia Marie on April 15, 2019 | Comments: one comment
Related : Soap Opera, Spoiler, Television, The Young and the Restless 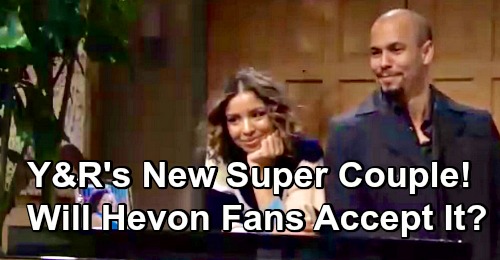 The Young and the Restless (Y&R) spoilers tease that Elena Dawson (Brytni Sarpy) and Devon Hamilton (Bryton James) inch closer to becoming a real couple. Many of the Hevon fans believe it is much too soon for Devon to be moving on with a new woman. It hasn’t even been a year since Hilary Curtis (Mishael Morgan) died. Although the Y&R fans know that Devon is devastated by her loss, they want him to wait for the right person.

Many viewers have pointed out on social media that they aren’t sure if Elena is the right person for Devon. Many noted that they think she is hiding something big about herself or her agenda.

The new regime has a very difficult task. They have to take Elena and Devon from a dating relationship to super couple status without making it seem like a leap. It must feel natural. This might be a very big task. So far. the writing team has done a great job of transitioning Elena and Devon’s relationship naturally.

Another issue the Y&R writing team faces with Elena is many of the Hevon fans assume she is hiding a secret from Devon. They think she is may not be who she says she is. Well, that would mean nothing as Hilary came to town under an assumed name with the plan to torment the Winters family.

If the Hevon fans will give Elena a chance, she could be great for the young billionaire. She’s smart, happy, and willing to help others. She embodies many of the qualities Devon wished Hilary had. Now, if she’d develop some of Hilary’s sassiness, she could probably seal her fate as Devon’s next great love.