BY hellodrdavis on July 17, 2019 | Comments: one comment
Related : Soap Opera, Spoiler, Television, The Young and the Restless 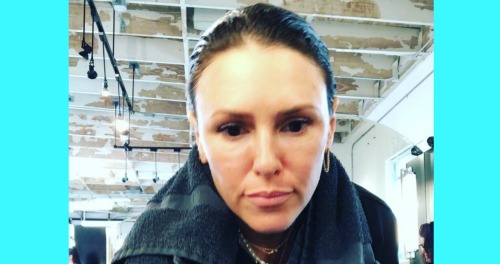 The Young and the Restless spoilers has some fun news to pass on about a recently returned Y&R actress. Elizabeth Hendrickson, who portrays Chloe Mitchell on the CBS soap and recently wrapped her stint as Margaux Dawson on GH, recently shared an update with her fans on Instagram about her new look.

Elizabeth posted a video of herself undergoing a style transformation at a hair salon in Los Angeles. In the video, she’s sitting in her hair stylist’s chair holding her dog Twiggy, while the stylist gives her a new hairstyle. Elizabeth captioned the video with: “No big deal. I have bangs now.”

You can check out the time-lapsed video below to see Elizabeth’s transformation. Note that Twiggy sits patiently during the entire process, while Elizabeth happily chats with her stylist.

Elizabeth’s followers were thrilled to see her video and her new look. One fan commented: “You’re making me want bangs! Beautiful!!” And another said: “You look great either way. Just get back on Y&R asap, ok?”

Some of Elizabeth’s soap star colleagues also joined in the conversation. Greg Rikaart (Kevin Fisher, Y&R) commented: “LOVE!!!!” And Finola Hughes (Anna Devane, GH) replied: “Look how much you talk…!!!!” referring to all the chatting that Elizabeth and her stylist do in the video.

Finally, Kate Mansi (Abigail DiMera, DOOL) commented: “Love both you girls! (All 3 actually!)” referring to Elizabeth’s dogs, one of whom of course made an appearance in the salon video.

Given that Y&R tapes several weeks in advance, it will be a while before viewers see Elizabeth’s new hairstyle on screen. Besides, Chloe has been away in Portland awaiting Kevin Fisher’s (Greg Rikaart) return. But something tells us that we’ll see Chloe back in Genoa City sooner rather than later.

What do you think of Elizabeth Hendrickson’s new look? Stay tuned to the CBS soap and don’t forget to check CDL often for the latest Young and the Restless spoilers, updates, and news.

No bid deal I have bangs now.